Fuel supplier Viva Energy says a speedy delivery of a newly announced taxpayer support package will be vital to reduce the risk of closures across the nation's remaining oil refineries.

Viva, which last week warned its Geelong oil refinery was being pushed to breaking point by the coronavirus-driven collapse in fuel demand and could be forced to permanently close in the absence of government help, welcomed Federal Energy Minister Angus Taylor's announcement of measures including grants to boost storage capacity and a direct payment of 1.15¢ a litre for locally made fuel. 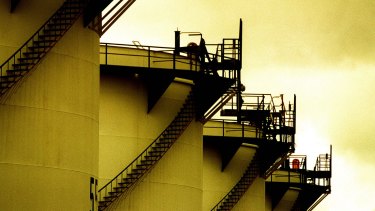 Three Australian oil refineries have closed in the past decade. Now, COVID-19 is threatening the last four remaining.Credit:Rob Homer

However, as the threat of closure hangs over the 65-year-old refinery and its 700 staff due to the severity of the downturn, Viva chief executive Scott Wyatt said the "speed of execution" of those support measures would be a critical factor.

"The current situation is extremely challenging," Mr Wyatt told The Age and The Sydney Morning Herald. "The sooner we can get back to full production the sooner we can access the sort of support that's contemplated in the package that was announced today is critical."

Australia's four remaining refineries have been under enormous strain since travel restrictions and stay-at-home orders to curb the spread of the coronavirus pandemic wiped out demand for petrol, diesel and aviation fuel. Viva's Geelong refinery and Ampol's Brisbane plant have sunk to half-year losses of more than $50 million each.

In the past decade, three Australian oil refineries – which process crude oil into refined products such as petrol, diesel and jet fuel – have closed down as the domestic sector struggles to compete against the mega-refineries of south-east Asia with their vastly larger scale and lower operating costs.

Following months of industry consultations, the Morrison government on Monday announced a series of new measures to buffer against potential supply shocks caused by global events such as wars or pandemics, and to help keep refineries open "wherever commercially possible".

"The events of 2020 have reminded us that we cannot be complacent," Prime Minister Scott Morrison said. "We need a sovereign fuel supply to shield us from potential shocks in the future."

A minimum stockholding obligation of 24 days will be introduced to act as a safety net for petrol and jet fuel stocks while diesel stocks will be increased by eight days, to around 28 days of supply. The policy aims to bolster the local industry through a $211 million investment in competitive grants to build an additional 780 megalitres of onshore diesel storage.

MST Marquee energy analyst Mark Samter said the federal government's support package was a clear acknowledgement that it wanted to retain a local refining sector, but the "devil is going to be in the detail" as to whether it would be sufficient to prevent closures.

Ampol, formerly known as Caltex Australia, welcomed the government action and the recognition of the sector's challenges, and said it looked forward to working with the government as further details became known to determine how the package could impact the business.

"Global and domestic conditions for refining remain uncertain and extremely challenged," Ampol said. "We will continue to review our refining operations."

Mr Wyatt commended the Morrison government for moving quickly in its work with the refining sector since the onset of the pandemic.

"These are complex issues that will need some time to work through," he said. "But working through them at an appropriate pace will remain really important for us.