Donald Kendall, the American executive who served Pepsi to Soviet leader Nikita Khrushchev in Moscow during a famous Cold War interlude that presaged PepsiCo's pioneering move into the communist country, has died. He was 99.

He died Saturday (US time) night of natural causes at his home surrounded by his family, according to a company statement. 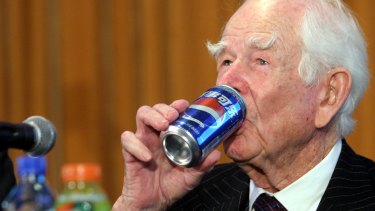 Former PepsiCo boss Donald Kendall famously served Pepsi to Soviet leader Nikita Khruschev when a US official recruited him to participate in the 1959 American National Exhibition in Moscow.Credit:Getty Images

As chief executive officer of Pepsi-Cola Co. starting in 1963, Kendall oversaw development of the slogan, "Come Alive! You're in the Pepsi Generation," and engineered the 1965 merger with Frito-Lay that created PepsiCo. As CEO of the merged company until his retirement in 1986, he led the expansion of business into the Soviet Union and China and the relocation of company headquarters to Purchase, New York, from Manhattan.

He had laid the foundations for serving American soda to Russians earlier in his career. Kendall was Pepsi-Cola's head of international operations when a US official recruited him to participate in the 1959 American National Exhibition in Moscow. He brought a team of Russian-speaking college students, a supply of Pepsi fountain syrup and carbonation machines to Moscow, while some colleagues back home questioned his judgment. At a reception, he told Vice President Richard Nixon that he needed the trip to be a success.

The next day, July 24, 1959, Nixon and Premier Khrushchev toured the exhibition and debated capitalism and communism through interpreters in what became known as the Kitchen Debate, named for the room in a mocked-up American house where it took place.

After the exchange, Nixon steered Khrushchev to the Pepsi kiosk, where Kendall offered the Soviet leader and his entourage cups of soda made in the US and on-site in Moscow.

"I wanted to show him that we could make a product in Moscow that was just as good as what we made in the US," Kendall said.

Newspapers around the world carried photographs and accounts of the culture clash. 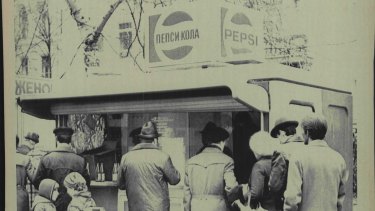 In 1974, Pepsi broke into the communist USSR market under a pioneering deal Kendall struck with the Soviet trade ministry.Credit:AP

According to Kendall, Khrushchev went a step further and proclaimed, "Drink the Pepsi-Cola made in Moscow. It's much better than the Pepsi made in the US"

For Pepsi, the moment melded well with its slogan at the time, "Be Sociable, Have a Pepsi."

Not until years later, in 1974, did Pepsi actually break into the USSR market, opening its first bottling plant under a deal Kendall struck with the Soviet trade ministry. In return, PepsiCo expanded its distribution of Stolichnaya vodka as well as other alcoholic beverages from the USSR. In 1978, the company and the USSR agreed to expand both operations.

Kendall became a regular visitor to Russia, a friend of Nixon during and after his presidency, and co-chairman of the US-USSR Trade and Economic Council. "If I've learned one thing," he wrote, "it is that Russians and Americans have far more in common than most people would ever guess."

After stepping down as PepsiCo CEO in 1986, Kendall served until 1991 as chairman of the board's executive committee.

Kendall was born March 16, 1921, in Sequim, Washington, where he worked on his family's dairy farm. His parents were Carroll and Charlotte Kendall, according to a 2015 profile in the Greenwich Sentinel newspaper in Connecticut.

He attended Western Kentucky State College on a football scholarship but joined the US Navy after three semesters, serving in World War II as a bomber pilot in New Guinea and the Philippines.

After the war, he joined Pepsi-Cola and sold fountain syrup. By 1952, he was vice president in charge of national sales. As head of Pepsi-Cola International from 1957 to 1963, he doubled the number of countries in which Pepsi did business and tripled overseas revenue, Fortune magazine wrote in 1987. 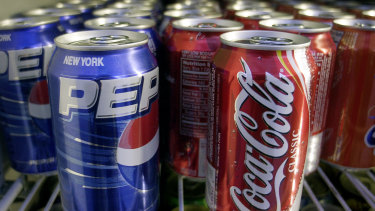 Kendall was the driving force in making Pepsi competitive with Coca-Cola. Credit:AP

When Kendall became head of Pepsi-Cola in 1963, the company "trailed so far behind arch-rival Coca-Cola that the folks in Atlanta didn't even acknowledge the rivalry," according to Fortune.

Kendall added new products including Diet Pepsi and Mountain Dew – the latter through the purchase of Tip of America – before the 1965 merger with Frito-Lay.

Under Kendall, PepsiCo hired architect Edward Durell Stone to design a world headquarters on 144 acres in Purchase, about 48 kilometres north of Manhattan. The property's outdoor sculpture garden is named for Kendall, who settled his family in nearby Connecticut.

Kendall and his wife of 55 years, Bim, had two children. He also two children from a previous marriage.

A concise wrap of the day on the markets, breaking business news and expert opinion delivered to your inbox each afternoon. Sign up for the Herald‘s here and The Age‘s here.