Rishi Sunak will face his sternest test this week when he stands up in parliament to outline the latest post-coronavirus economic recovery plan. Billed as a major part of the government’s post-Dominic Cummings reboot, the spending review will set out the budget limits for departments across Whitehall over the next financial year.

More than that, the chancellor will be under pressure to show how the government’s “levelling-up” agenda to boost northern towns and cities will translate into actual projects, and what an infrastructure revolution means in practice.

But with the government’s health advisers concerned that an easing of lockdown rules at Christmas will bring further restrictions in the new year, the chancellor must somehow project confidence that his plans will boost jobs and help the economy grow again – and without setting limits that force him into another U-turn.

His last major appearance at the Commons dispatch box, on 5 November, was full of embarrassing climbdowns. Sunak ditched his “winter plan” and increased support for businesses, employees unable to work and self-employed workers, after it became clear that further Covid restrictions would end hopes of a V-shaped recovery.

In a major climbdown, Sunak said the Treasury would extend the furlough scheme to run for a full year by continuing to pay 80% of temporarily laid-off workers’ wages until 31 March. The chancellor also announced an expansion in funding for self-employed workers from November to January, in a speech that contrasted with his insistence in September that it was “fundamentally wrong to hold people in jobs that only exist inside the furlough”.

24 September
The chancellor announces the “winter economy plan” to replace the job retention scheme (JRS), which was introduced in March and covered 80% of the wages of temporarily laid-off workers. Commonly known as the furlough scheme, at one point the JRS supported more than 9 million employees.

Rishi Sunak says it will be replaced by a German-style wage subsidy programme to cover two-thirds of wages for staff working shorter than usual hours. Known as the job support scheme (JSS), it offers to cover 33% of pay and employers would contribute 33%. It was designed to replace the JRS from 1 November.

Sunak also announced an extension in the self-employed income support scheme (Seiss), offering to cover 20% of average monthly profits between November and January.

9 October
Sunak announces additional support for businesses forced to close their doors. The furlough replacement becomes a two-pronged system: JSS: open and JSS: closed. The latter is designed to pay 67% of wages without employer contributions. Bigger cash grants are also announced for businesses required to close.

22 October
Sunak is again forced to tweak his plan. Amid rising pressure from rebellious northern Tory MPs and a rapidly deteriorating economic outlook, the chancellor drastically cuts the level of employer contribution on the JSS: Open to 5%, from 33% previously.

He also launches new grants scheme for businesses hit by local lockdowns, with cheques worth up to £3,000 a month made available. He also doubles the level of support on Seiss to 40% of trading profits.

31 October
Boris Johnson’s decision to launch a four-week lockdown in England comes with an extension of furlough UK-wide to cover the period. It is announced just five hours before furlough is due to end.

2 November
Sunak moves to give self-employed workers similar support, doubling the support to 80% of trading profits – the same level as it had been in the first lockdown. He also extends the deadline for state-backed business loans until 31 January.

5 November
The chancellor extends the furlough scheme until 31 March, covering 80% of workers’ wages. Support for the self-employed is also increased from November to January to a similar level.

Treasury officials say their boss needed to stay nimble while the path of the virus was uncertain, and that that is what he has done over the past eight months.

Another view can be found outside No 11 Downing Street, among business leaders, trade unions and thinktanks. They mostly praise the chancellor for recognising in March that 10 years of austerity had stripped the welfare state of most automatic support mechanisms and that the economy was therefore in need of unprecedented special measures to protect businesses and livelihoods. This praise has evaporated in the months after the first lockdown and now they have a common grievance – that the chancellor “fell behind the curve” during the summer.

Make UK, the main organisation representing British manufacturers, said that while businesses were generally supportive of No 11’s efforts, “the Treasury has not offered the kind of support for specific industries found in France and Germany, where carmakers and the aerospace industry have benefited”.

A spokesman added: “Businesses are telling us that they can’t see a plan, that the strategy is missing, that ministers tack this way and that without a rudder. And all they hear are platitudes.”

The Treasury has allowed many of the main proposals in this week’s spending review to leak out in the past few days, in particular the two cost-saving measures that Sunak plans to impose – both crowd pleasers for Tory backbenchers.

A pay freeze over the next year for all 4.5 million public sector workers, except doctors and nurses, and a cut in overseas aid will be announced, though these are expected to be the only cost-saving measures in a package otherwise focused on growth.

Suren Thiru, head of economics at the British Chambers of Commerce, says that is just as well, when “the whole project should be about injecting confidence and momentum into the economy”. 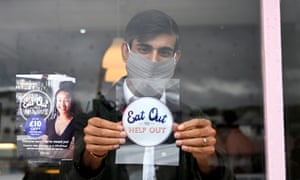 There will be plenty of space given in the chancellor’s speech for the government’s levelling-up agenda, infrastructure spending and the creation of green jobs. But Torsten Bell, chief executive of the Resolution Foundation thinktank, reflects widespread frustration when he says there needs to be more meat on the bones.

“There will be huge amounts of money allocated to infrastructure, and especially research and development, which was championed by Dominic Cummings and signed off before he left.” said Bell. “But there will be a good deal of frustration if the detail is lacking.”

Caterina Brandmayr, head of climate policy at the thinktank Green Alliance, said the 10-point green industry package announced by the government last week lacked “the level of detail and scale of funding that would give a clue about how the government plans to achieve its aims”.

She hopes the chancellor will go some way to giving it some financial heft. “It is not only a matter of publishing strategies: it is also the scaling-up of funding that is needed,” she said.

The 10-year plan was billed as costing £12bn, with Downing Street saying £8bn of this was new – though Labour said it believed only £4bn was fresh funding.

A forecast for the public finances for the rest of the parliament and beyond by the Office for Budget Responsibility, the government’s independent forecaster, may explain why amplifying modest spending increases is the order of the day.

The OBR is expected to say that the annual deficit – the gap between government expenditure and income – is on course to rise from 2.5% of GDP last year to around 20% this year – about £400bn – taking the total debt ratio to around 106% of GDP.

Carl Emmerson, deputy director of the Institute for Fiscal Studies, said the size and scale of Covid-related spending would make it difficult to discern the underlying health of the public finances. “If this was a war, there would be a reserve fund and the military would draw on it when needed,” he said. “A pandemic is like a war in the level of spending, but it happens across a broad spread of departments, and that makes it much more difficult to assess.”

Emmerson said the OBR figures would look alarming, but the emphasis had to be on expanding the economy as a way to increase government income and reduce the need for emergency economic support.

“In 2010, following the banking crash, George Osborne said the economy would be smaller in the years ahead and so public spending will be smaller. We are unlikely to see that next week,” he said.

For all the reservations about the chancellor’s U-turns – each time spending more than he had intended only weeks before – he has the praise of the International Monetary Fund to fall back on. In its twice-yearly health check, the Washington-based organisation said the UK’s response to the pandemic had been “one of the best examples of coordinated action globally”.

Sunak will hope that, after his recent mis-steps, he can recapture his glorious spring.