Facebook has banned the sharing or viewing of our news articles on its platform. For independent journalism straight from the source, download our app and sign up to our newsletters.

The most senior US executive at Australian shipbuilder Austal has resigned after an external investigation found the company had built Navy vessels with parts that did not meet military specifications, underestimated costs and mis-allocated labour hours.

Shares in the ASX-listed defence contractor tanked more than 10 per cent on Tuesday after it said its board had accepted the resignation of its US president Craig Perciavalle in light of governance and compliance issues identified by the company. 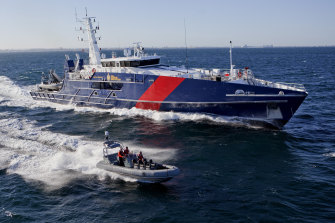 Austal’s top US executive has resigned after an external probe found funds had been misallocated and parts installed incorrectly.

Austal said it had enlisted a team of lawyers to conduct the investigation after the Australian Securities and Investments Commission and US agencies started probing a $US115 million write-back the company made in 2016 to recognise an increase in construction costs for its US combat ships.

In a market announcement on June 17, 2016, Austal said it had “successfully completed” three shock trial blasts of its US ships to test whether they could withstand nearby explosions. Investors later learnt the ships did not pass the tests and would require major modifications.

The company made a series of bearish announcements to the ASX in the weeks that followed before downgrading its guidance to a loss of between $116 and $121 million on July 4, 2016.

Austal said in a statement on Tuesday that the combat ships cost more to construct than originally anticipated largely because of problems detected after completing the mandatory shock tests.

Austal said the external investigation it commissioned concluded the company had “appropriately adjusted” its revenue and profit following the 2016 payment, but had discovered additional red flags in the process.

These included inaccurate estimates for the costs of building the ships, faulty installation of valves that did not meet military specifications and “isolated instances of misallocation of labour hours between vessels”.

A significant Austal shareholder, who only spoke on the condition of anonymity, said Tuesday’s announcement implied there was a cover-up.

“This would suggest the investigation has found something in terms of not reporting back to head office the real circumstances,” said the shareholder.

“The inference is he’s been involved in covering up the fact profits weren’t as good as they were thinking.”

Austal said the investigation was based on what it “understands” the corporate regulators are looking into, adding it would continue to work with both parties.

“It is not possible at this stage to predict what action (if any) they may take in relation to these matters,” Austal said in a statement.

“However, the company is confident that the proactive steps it has already implemented to strengthen its internal reporting and compliance practices will be taken into account.”

Austal was founded 33 years ago, employs 5500 staff globally and supplies ships to the Australian and US navies.

The Age and The Sydney Morning Herald reported in October that Australian Border Force was the target of a corruption investigation over allegations one or more ABF officers improperly funnelled $39 million to Austal in order to prop up its financial position.

That probe is being led by the Australian Commission for Law Enforcement Integrity, a body that deals with serious and systemic corruption allegations within the army, police and other law enforcement agencies.

Around $8 million of the $39 million milestone payment was made to Austal the day before the company went into a trading halt, pending the announcement of the earnings update at the centre of the US probe. It’s understood corporate regulators are sharing information to assist the commission’s investigation.

The Australian corruption probe was launched after an Auditor-General’s report found glaring red flags in the decision to approve the milestone payments, but the direction of the investigation was later re-routed, causing friction within law enforcement and reigniting calls for a federal anti-corruption agency.

Austal’s most recent annual report shows it has made an $11.25 million provision to cover costs that might arise from ASIC’s investigation, but this figure could balloon.

“The provision could change substantially over time as new facts emerge and the investigations progress as a result of the high level of estimation uncertainty,” Austal said.

“The group is not aware of any wrongdoing.”

ASIC tried to sue the company last year for access to documents and a Federal Court determination was scheduled to be heard in June but was delayed because of COVID-19.

“It is possible that those proceedings could lead to civil or criminal penalties, damages, and/or suspension or debarment from future US government contracts, which could have a material adverse effect on its consolidated financial position, results of operations, or cash flows,” Austal’s annual report said.

The significant Austal shareholder said he was shocked by the market reaction.

“Obviously the CEO from the US going isn’t the best, any change is always a potential risk,” he said.

“But it’s all pretty old news in terms of the actual write-back and what it means for the company.”

Start the day with major stories, exclusive coverage and expert opinion from our leading business journalists delivered to your inbox. Sign up for the Herald’s here and The Age’s here.