Greensill Capital’s unravelling is piling pressure on the sprawling empire of a British industrialist known as the ”saviour of steel.”

Sanjeev Gupta’s GFG Alliance, which spans steel, aluminum, renewable energy and banking assets in around the world, including in Australia, owes much of its expansion to Lex Greensill’s eponymous firm that’s fighting to stave off a collapse. GFG spent about $US6 billion ($7.8 billion) in just five years, targeting old, unwanted assets, with funding help from Greensill. 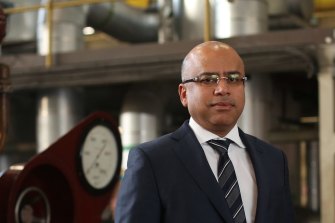 But with Greensill’s supply chain finance business crumbling, the question is what that means for Gupta. By Wednesday, there were already signs of stress. Germany’s financial watchdog said it closed Greensill Bank after finding irregularities in how the lender booked assets tied to Gupta. Also, the Bank of England asked GFG’s Wyelands Bank to pay back retail depositors, prompting a fresh cash injection of £75 million ($135 million) from its shareholder.

The BoE took the step due to concerns with Wyelands’ business model and its exposure to the rest of the alliance, according to a person familiar with the matter, who asked not to be identified discussing private information. In a statement on Wednesday, Gupta said that the bank was recapitalised following turmoil caused by Brexit and the pandemic, and that it planned to focus on “business advisory and connected finance” going forward.

GFG has never published a consolidated set of accounts, making its financing near-impossible to track. In October, Gupta told Bloomberg that Greensill was its biggest lender and that while it planned to diversify funding, the relationship with the financier would likely go from strength to strength.

“We’re very proud of our relationship with Greensill,” Gupta said at the time.

The turmoil surrounding Greensill comes as Gupta’s businesses should be in a position to benefit from rallying commodities markets. Steel and aluminum prices have soared since the nadir of the COVID-19 pandemic on rebounding Chinese demand and bets that vaccine roll-outs will help drive a global economic recovery.

A spokesperson for GFG said the group has “adequate current funds” and that plans to secure new financing were progressing well. They also said GFG has benefited from the recovery in steel and aluminum markets and that its businesses were running near full capacity.

“It’s never good for companies to be overleveraged, as in the case of GFG Alliance,” said Robin Bhar, an independent consultant to the metals industry and long-time market watcher. “That said, rising metals prices are always a panacea for many ills.”

The son of an Indian industrialist, Gupta moved to the UK when he was 13. He started a commodity-trading business, Liberty House, in 1992 while studying at Cambridge University. While his foray into European steelmaking started in 2013, it was during the downturn of 2015 and 2016 that he really saw an opportunity to grow, snapping up distressed steel assets.

Gupta now owns aluminum smelters in France and Scotland, and steel mills in the US, Australia, Romania and the Czech Republic. His group of companies employs 35,000 people in 30 countries, according to its website. He also recently made a bold bid for the steel unit of Germany’s Thyssenkrupp AG.

German regulator BaFin has been scrutinising Greensill Bank since last year, with concerns mostly related to its outsized exposure to Gupta. Among the most serious findings of the probe was that the bank booked claims for transactions that hadn’t yet occurred but which were accounted for as if they had, Bloomberg reported, citing people familiar with the matter.

During an audit, BaFin found that Greensill Bank “was unable to provide evidence of the existence of receivables in its balance sheet that it had purchased from the GFG Alliance Group,” the regulator said. GFG has been an early backer and client of Greensill’s firm.

Greensill said in a statement late on Wednesday that it had received “extensive advice,” from law firms in the UK and Germany on how to classify the assets, and that it immediately complied after BaFin advised it at the end of 2020 that it didn’t agree with its accounting.

“Greensill Bank has at all times been transparent with its regulators and auditors about its approach to classifying assets and the methodologies for determining such classifications,” a spokesman for the company said.

The question over what Greensill’s future holds for GFG is also starting to worry labour unions.

“The speculation is very concerning and we are pressing the company for answers,” said Community, one of the biggest unions for the UK steel sector. “We are ready to work with the company and the government to secure jobs and safeguard the future of this crucial strategic business.”

Start the day with major stories, exclusive coverage and expert opinion from our leading business journalists delivered to your inbox. Sign up for the Herald216;s here and The Age‘s here.