Joe Biden’s $US2.25 trillion ($3 trillion) “infrastructure” plan envisages far more than an upgrading of roads and bridges: it would create a radical and transformative overhaul of the US economy and its society.

Only about half of the massive spending package would be devoted to measures commonly thought of as infrastructure; the other half to aged and disability care, climate change, union-focused employment, skills-based training and manufacturing industry subsidies and incentives. 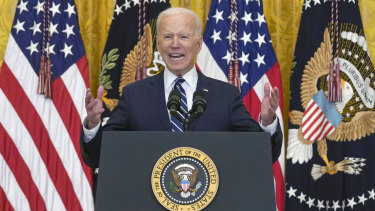 Coming hard on the heels of Biden’s $US2 trillion COVID relief package, the plan would also significantly increase US deficits and debtCredit:AP

If it can be implemented – much of it will face fierce Republican opposition in the Senate and even from some moderate Democrats – it would represent a repudiation of four decades of a deregulationary consensus in the US and a vastly enhanced role for the federal government in the US economy.

Coming hard on the heels – only weeks after – Biden’s $US2 trillion COVID relief package – it would also significantly increase US deficits and debt over the near-decade envisaged for its implementation because it would be only partly funded.

The $US1.5 trillion of funding for the plan (it would take 15 years to fully fund the decade of spending) will come entirely from the US corporate sector, with Biden proposing to claw back most of the tax cuts Donald Trump awarded to corporate America in 2018 when he cut the corporate tax rate from 35 per cent to 21 per cent.

Biden plans to raise the rate back to 28 per cent, institute a global minimum tax rate of 21 per cent for US multinationals, repeal some tax incentives Trump enacted and end fossil fuel tax breaks.

The US economy has become steadily less productive and competitive over decades, even though it still measures well against all but China. It has also become an increasingly divided and dysfunctional society.

There will be the expected backlash from big business in the US to the increase in corporate taxes but, globally, there is pressure for more revenues to pay for the massive fiscal responses to the pandemic. The UK, for instance, has foreshadowed an increase in its corporate tax rate from 19 per cent to 25 per cent.

Critics will say the Biden plan will reduce business investment and cost jobs but Trump’s tax cuts were far less productive than he promised.

While there were high single-digit percentage increases in business investment and research and development, much of the increased profitability of US companies devoted to share buy-backs and increased dividends.

Buy-backs increased dramatically in the first year of the reduced rate – there were about $US800 billion of buybacks in 2018, about $US200 billion more than in 2017. They remained elevated in 2019 ($US730 billion) and were $US200 billion in the first quarter of last year before the pandemic struck. 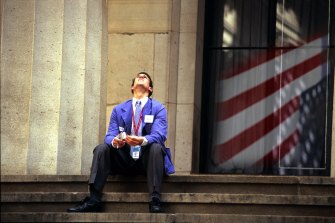 The $US1.5 trillion of funding for the plan will come entirely from the US corporate sector, with Biden proposing to claw back most of the tax cuts Donald Trump awarded to corporate America in 2018.Credit:Greg Newington

The buybacks were also partly funded with debt to enhance their scale, leaving the US corporate sector significantly more leveraged as a consequence.

Biden’s tax plan isn’t just about increasing the headline rate. The largest US companies will face a minimum 15 per cent tax rate for domestic earnings and the tax on overseas earnings will be set at 21 per cent against a current effective rate of about 13 per cent.

Moreover, the administration says it wants to eliminate an international “race to the bottom” on corporate taxes by “encouraging” other countries via multi-lateral negotiations to adopt “strong” minimum taxes on companies to ensure foreign companies aren’t advantaged and foreign economies can’t gain a competitive edge.

There has been a long-standing dialogue among the advanced economies along those same lines, although Trump’s “America First” stance has complicated and delayed agreement.

Achieving a consensus will be one of Mathias Cormann’s priorities as he takes up his new role as secretary-general of the OECD, which has devoted years to the project without making meaningful progress.

Ending the fruitless international competition on corporate tax rates – if everyone is forced to lower their rates to remain competitive no-one wins – would be a significant achievement for Biden, and perhaps Cormann.

It also, however, seeks to “revitalise” US secure supply chains and reorient America’s skill base towards the “jobs of the future.” 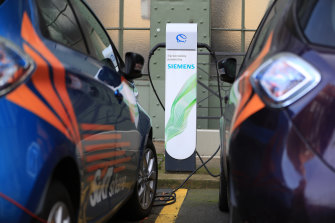 The plan includes subsidies for electric vehicles and a national network of charging stations and a lot of spending on shifting investment away from fossil fuels and towards green energy.Credit:Bloomberg

There are subsidies for electric vehicles and a national network of charging stations and a lot of spending on shifting investment away from fossil fuels and towards green energy.

There tilts within the most of the spending in the overall package towards disadvantaged communities and “green” energy.

While the latest spending (there is said to be at least one more major program, a $US1 trillion education-related plan) might face some difficulties in Congress, it is comprehensive and reveals an integrated vision of the kind of economy and society the administration aspires to.

That’s a stark contrast with its predecessor administration and its ad hoc, dysfunctional, simplistic and, at times, counter-productive economic and trade policies.

The US economy has become steadily less productive and competitive over decades, even though it still measures well against all but China. It has also become an increasingly divided and dysfunctional society.

The Biden relief and infrastructure packages at least recognise those deteriorations and they attempt to address them in a comprehensive and coherent way.

Whether they find their way largely intact through Congress, and whether they succeed or fail, they will have an impact on the debates about the extent to which government should intervene in the economy, in the US and elsewhere.

Those are debates that, even in the US will find more traction and support for a more active and enlarged role in a post-pandemic world and one in which the potential decoupling of east and west – China and the western advanced economies – looms large.