The House will vote on making Washington, D.C., the 51st state during the week of April 19, the district’s non-voting representative in Congress announced Wednesday.

Eleanor Holmes Norton, the D.C. delegate, said the House Oversight Committee will vote on her statehood bill on April 14 and then send the legislation for a full House vote the following week.

“The week of April 19th the House will take a historic step in righting the monumental wrong of denying the 712,000 federal taxpaying American citizens who live in the nation’s capital voting representation in Congress and self-government without congressional interference into local affairs,” Norton said in a statement. 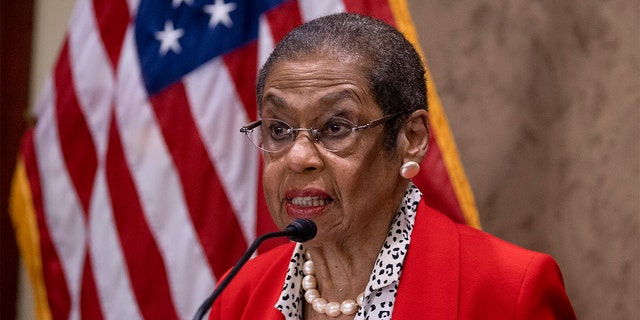 WASHINGTON, DC – JULY 23: Del. Eleanor Holmes Norton (D-D.C) speaks on Capitol Hill on July 23, 2020 in Washington, DC. The bill defies longstanding precedents in treating the District of Columbia as a territory instead of as a state for federal funding under the $150 billion coronavirus relief fund for states and territories, depriving D.C. of an estimated $750 million. (Photo by Tasos Katopodis/Getty Images)
(Getty Images)

The Democrat-led House passed D.C. statehood once before, but the legislation died in the GOP-controlled Senate last year. Norton expressed optimism that her legislation would pass again, despite the very slim Democratic majority now in the House.

“[W]e expect the House to pass the D.C. statehood bill for the second time in history,” she said.

D.C. has a population of more than 700,000 residents — greater than Wyoming and Vermont — but the residents don’t have voting members in Congress or full control over local affairs. However, the District of Columbia pays more in federal taxes than 21 states and more per capita than any state, according to the 2019 IRS data book.

HOUSE PASSES DC STATEHOOD BILL: HERE’S HOW IT WOULD WORK

Under the plan, the 51st state would be called “Washington, Douglass Commonwealth,” named for Frederick Douglass.

D.C. would have full control over local affairs and full representation in Congress, which would amount to two senators and one representative in the House based on the current population.

The area around the White House, Capitol, Supreme Court and National Mall would be carved out into a federal district controlled by Congress and named the “Capital.”

Republicans have been firmly against D.C. statehood, calling it a Democratic power grab designed to tip the balance in the Senate in favor of Democrats by adding two senators from a liberal stronghold.

But Democrats have framed the issue as around civil rights and equality.

“Full and equal representation for the residents of the District of Columbia remains one of the major civil rights issues of our day,” House Majority Leader Steny Hoyer, D-Md., said in a statement Wednesday announcing the vote.

Norton’s legislation, aptly named H.R. 51, already has 215 co-sponsors — nearly all the Democrats in the House. In the upper chamber, Sen. Tom Carper, D-Del., has authored the companion bill and has netted 42 of the 50 Democrats in the Senate as co-sponsors, including Majority Leader Chuck Schumer, D-N.Y.

However, the legislation needs 60 votes to advance and therefore will die again in the Senate without GOP support.