There is a divergence between the inflation expectations in financial markets and those of central bankers. Which side is right might depend on whether there is a break from a perplexing long-term trend.

For the moment, central bankers are sanguine about the outlook for inflation despite the enormous monetary and fiscal policy responses to the pandemic that are seeing many trillions of dollars of relief and stimulus spending and liquidity being pumped into the global financial system.

The minutes of the March meeting of the US Federal Reserve’s Open Market Committee meeting released overnight confirmed that the Fed expects to keep its benchmark lending rate at or near zero until 2024. 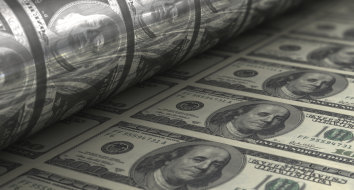 The supply of money in the global economy has increased dramatically, but it’s used less to fund productive activity.

Futures markets, however, are pricing in at least one rate rise next year and another three by early 2024. The yield on US 10-year government bonds has risen 85 per cent since the start of this year to just under 1.7 per cent.

Conventionally, the massive increase in government spending and central bank liquidity ought to result in inflation – there is a lot more money chasing a relatively stable volume of goods and services — and a subsequent response from central banks as they try to control it with higher interest rates and reduced liquidity.

From the early 1980s, however, as central banks increasingly switched their focus from the volume of money flowing through their economies to its price, using interest rates to target inflation levels, inflation has been subdued to the point that in the post-2008 financial crisis period they have been bemoaning the absence of inflation and expressing concerns about “secular stagnation”.

The decades of relatively low inflation and the shift in central bankers’ attention from volume to price coincided with the Reagan and Thatcher years, which ushered in an era of reduced government spending, lower taxes, deregulation and globalisation.

Probably not coincidentally, it also overlapped with an accelerating increase in “financialisation,” or an increase in the scale and significance of financial sectors within advanced economies. The move turned an expanding range of assets into tradeable investment commodities – including actual commodities like copper, coal and iron ore.

The period after the global financial crisis has been marked by a dramatic increase in central bank balance sheets as they poured liquidity into their financial systems. Their response to the pandemic has been even more aggressive.

Yet while the volume of money circulating within the financial system has increased, its velocity seems to have decreased.

The velocity of money is the frequency with which a unit of currency is used to produce goods and services within a given period of time. In the US, each unit was turning over about 3.5 times every three months back in 1980. That number has been falling steadily ever since to about one last year.

Where the money has ended up is fairly obvious. It has found its way into an ever-expanding range of financial assets whose value has been inflating continuously.

In the real economy, that means the money – broadly the currency in circulation and deposits in conventional financial institutions and investment funds – isn’t being spent on goods and services and productive investment. Business investment in the developed world has been weak for decades.

Where the money has ended up is fairly obvious. It has found its way into an ever-expanding range of financial assets whose value, particularly after the GFC, has been inflating continuously. It’s been deployed in speculative rather than productive investment; hence the stubbornly low levels of productivity – and inflation – in the developed world despite all the fiscal and monetary stimulus.

Financialisation of assets, and liabilities, has grown at rates unrelated to economic growth, and the pricing of risk and the premiums charged for risk have effectively disappeared. Formerly illiquid assets have become liquid. The ultra-low interest rates that central banks hoped would spark investment have only encouraged more speculative activity.

The 1970s and 1980s saw Japan emerge as a major and deflationary force in global manufacturing, followed by South Korea and then, increasingly by China. More recently, the ageing of the baby boomers has had an impact on spending and savings patterns as they shift their attention from consumption to security in retirement.

While there is no shortage of money flowing through financial systems, it could be that there has been a structural reduction in demand related to physical investment and consumption and therefore an over-supply of capital that has been diverted into financial assets.

Unless the velocity of money accelerates in developed economies, the likelihood of a material outbreak of inflation will be low.

It is conceivable that the sheer scale of the stimulus measures taken in response to the pandemic, the impact of the pandemic on supply chains (disruptions are leading to shortages of some key products) and the psychological impacts of emerging from the bleakness and fears of 2020 might cause a shift in business and consumer psychology that stimulates demand for goods and services and an increase in the rate at which money is recycled, reversing the decades-long trends.

But the conundrum confronting the central banks is that low rates, torrents of central bank liquidity and splashes of debt-funded government cash are just as likely to stimulate more speculation as they are to encourage investment in the real economy.

And even if central banks were successful in re-igniting inflation, their ability to control it would be constrained by the impact of rate hikes on over-inflated and over-leveraged financial assets.

It’s that the very constraint – the markets’ awareness of the central bankers’ fear of blowing up the markets and provoking a financial crisis – that has increasingly helped fuel financialisation by making it a one-way bet for speculative investment.

A concise wrap of the day on the markets, breaking business news and expert opinion delivered to your inbox each afternoon. Sign up here.