New York (CNN Business)Tesla’s $1.5 billion bitcoin bet from early this year had already increased in value by more than $1 billion by the end of last month.

The company disclosed in February that it used some of its available cash to invest $1.5 billion in bitcoin. Tesla on Monday reported a record quarterly profit, disclosing it had sold 10% of its bitcoin stake, netting a $101 million profit on those sales.
Tesla provided more details about its cryptocurrency holdings in a regulatory filing Wednesday, disclosing that it made a $128 million profit on some bitcoin sales, but recorded a $27 million loss on some of its other sales of the volatile digital asset.

It said the value of the company’s remaining bitcoin (XBT) holdings was $2.48 billion as of March 31. That’s probably fallen considerably, as the value of bitcoin is down about 10% this month — trading at $54,700 Wednesday. Prices reached nearly $65,000 earlier this month, and Tesla may have sold additional holdings at a higher price. Or it may have purchased more bitcoin at that higher price. Investors will have to wait until the company discloses more, likely in its next quarterly filing in three months.

Zachary Kirkhorn, Tesla’s chief financial officer, told investors Monday that the company’s bitcoin investment has “so far has proven to be a good decision.” Kirkhorn also holds the title of Tesla’s “master of coin,” a Game of Thrones inspired title he was given during the quarter when CEO Elon Musk also took the title of “technoking.”

The company made the bitcoin investment because it was looking for something to do with its excess cash that provided some level of return. Bitcoin also provides Tesla with the liquidity it needed while building new factories outside of Austin, Texas, and Berlin, Kirkhorn said. 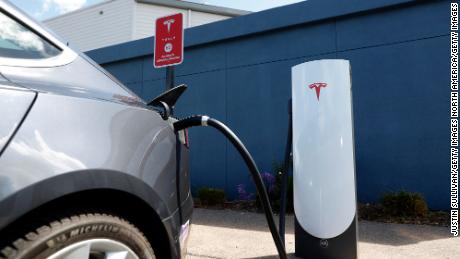 “Being able to access our cash very quickly is super important to us right now,” he said. “And there aren’t many traditional opportunities to do this or at least that we found [to get a return] … particularly with yields being so low, and without taking on additional risk or sacrificing liquidity.
“From a corporate treasury perspective, we’ve been quite pleased with how much liquidity there is in the Bitcoin market,” he added. “When we did the sale later in March, we also were able to execute on that very quickly.”
But he said the company intends to hold most of its bitcoin stake long-term.

“We do believe long term in the value of Bitcoin,” he said. He said the company is watching the cryptocurrency space closely and “there are things that we’re constantly discussing.”
But Kirkhorn said the company is not ready to disclose its plans further.
Source: Read Full Article