Australian mining giant Fortescue’s iron ore exports hit an all-time high in the past year, just as the price of the steel-making raw material rose to record levels driven by strong demand in China.

Fortescue, whose chairman and top shareholder is billionaire Andrew “Twiggy” Forrest, on Thursday told investors it had exported 49.3 million tonnes of iron ore in the June quarter, bringing its full-year output to a better-than-expected 182.2 million tonnes. 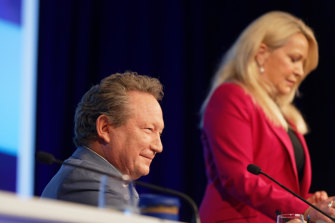 Andrew Forrest and Fortescue chief executive Elizabeth Gaines. The result marks the second year in a row that Fortescue has broken its record for iron ore exports, after delivering 178 million tonnes in the 2020 financial year.Credit:Trevor Collens

“This was an outstanding performance despite the impact of wet weather, as well as COVID-19 restrictions requiring many of our team members to remain on site for extended periods during WA’s lockdown,” Fortescue chief executive Elizabeth Gaines said.

The result marks the second year in a row that Fortescue has broken its record for iron ore exports, after delivering 178 million tonnes in the 2020 financial year.

Fortescue said it was targeting an even higher range of 180-185 million tonnes for 2022.

Australian miners including Rio Tinto, BHP and Fortescue have received a massive boost over the past 12 months as iron ore – the nation’s most lucrative export – hit a record-shattering $US230 a tonne thanks to aggressive, infrastructure-focused stimulus programs in China fuelling booming demand for steel. Meanwhile, global seaborne supply of the commodity has been constrained due to prolonged disruptions dragging on production volumes at Vale’s iron ore mines in Brazil.

Benchmark iron ore prices remain strong this week at more than $US200 a tonne. However, mining companies and investors widely expect prices to begin to decline as demand softens and as supply from Brazil begins to lift.

Rio Tinto chief executive Jakob Stausholm this week said the short-term spike seen from the start of the year may be unsustainable.

“The long term potential for China is still intact, but we probably have seen a non-sustainable, high level of industrial development in some of the months in the first half of this year,” he said.

Meanwhile, Fortescue on Thursday also said it was accelerating a push into green energy technology industries such as clean hydrogen, solar and hydropower in Australia and around the world. The company said it anticipated it would spend up to $US600 million ($812 million) on its clean energy venture, Fortescue Future Industries.