Australia’s unravelling “zero Covid” strategy will cost its economy more than $1 billion every week of lockdown as analysts warn restrictions in some of its states could last until October.

Forecasters warned that renewed lockdowns and the glacial pace of its vaccination programme will trigger a sharp drop in GDP in the third quarter as Delta cases threaten to explode. -Economists at UBS said the current lockdown in New South Wales will cause an $1 billion hit a week and cost the Australian economy a cumulative $25 billion. 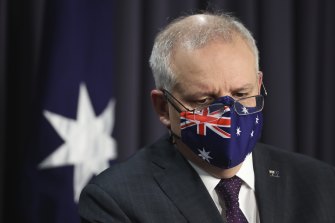 Scott Morrison’s government has been lambasted for a botched vaccine campaign that has left Australia’s jab rate lagging well behind other advanced economies.Credit:Alex Ellinghausen

If the most populous state is in lockdown for all of the third quarter and restrictions are imposed elsewhere, national GDP would fall by 2.5 per cent compared with the previous three months, the bank warned. Such a decline would not be as damaging as the record 7 per cent slump suffered in the second quarter of 2020 but would still be far larger than pre-Covid contractions.

Australia has been held up as a success story in the pandemic, but countries pursuing a “zero Covid” approach are struggling to contain the fast-spreading Delta variant. An outbreak in China is also threatening its zero tolerance stance as the UK, US and Europe are forced to learn to “live with Covid”.

George Tharenou, a UBS economist, warned the “looming very large economic cost of the lockdown is already evident” in recent retail sales and payroll data. He estimated up to $1.5 billion of government support every week will be needed to prop up the economy.

Scott Morrison’s government has been lambasted for a botched vaccine campaign that has left Australia’s jab rate lagging well behind other advanced economies.

He acknowledged on Monday that voters were “angry”, but warned there “can be no shortcuts”. The prime minister has suggested that 70 per cent of adults will need to be fully vaccinated to move to “phase B” where Covid restrictions are eased.

Despite a recent pick-up in jab numbers, Mr Tharenou cautioned that “the ‘magic number’ for reopening still can’t be reached before October”.

“We also expect a longer tail of restrictions compared with after previous lockdowns, and subsequently a slower rebound in mobility and economic activity,” he added.