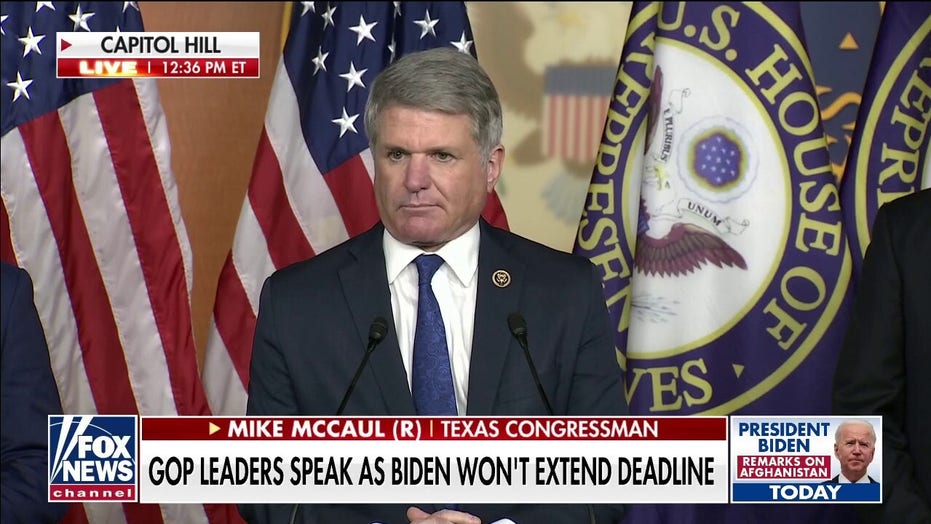 Rep. McCaul: Biden ‘will have blood on his hands’ by not extending Afghanistan deadline

Rep. Michael McCaul, R-Texas, warns people are going to be left behind and die if more time is not allotted for the U.S. evacuation of Afghanistan.

Critics slammed President Biden and said he will “have blood on his hands” after it was announced the U.S. will not extend the Aug. 31 deadline of withdrawing U.S. troops from Afghanistan.

“I can tell you there’s no way we can humanly get all of our American citizens and Afghan partners out of country by that time. I’ve called this consistently an unmitigated disaster of epic proportions. It will be a stain on this presidency, and particularly of the decision made today, and what we heard today. He will have blood on his hands, people are gonna die,” Republican Rep. Michael McCaul said during a press briefing on Tuesday afternoon.

A U.S. official told Fox News’s Lucas Tomlinson on Tuesday that Biden decided against extending the Aug. 31 deadline to withdraw all American troops from Afghanistan. The announcement came after Taliban leader Mullah Abdul Ghani Baradar and CIA Director William Burns met in Kabul, and a Taliban spokesman said there will be “no extensions” to the deadline.

Critics joined McCaul in denouncing the president’s decision, with many taking to Twitter to characterize the announcement as “disgraceful” and an example of Biden “bowing to terrorists.”

The Taliban said this week that they were unwilling to extend Biden’s Aug. 31 deadline, and warned of “consequences” if the deadline was extended.

“It’s a red line. President Biden announced that on ​Aug. 31 they would withdraw all their military forces. So if they extend it, that means they are extending occupation while there is no need for that,” Taliban spokesman Suhail Shaheen told Sky News.

“If the U.S. or U.K. were to seek additional time to continue evacuations – the answer is no. Or there would be consequences,” he said, adding an extension would “create mistrust between us.”

Biden had come under increasing pressure this week from political leaders, such as Senate Minority Leader Mitch McConnell and Rep. Dan Crenshaw, to extend the withdrawal date in order to rescue American citizens and Afghan refugees.

“The only proper response from America to these dirty savage terrorists should be: Go f*** yourself,” Crenshaw, R-Texas, tweeted on Monday.

U.S. officials said Tuesday that  21,600 people were evacuated from Kabul over a 24-hour period, bringing the total number of evacuees since Aug. 14 to around 58,700 people.

The Biden administration, however, has been unable to say exactly how many Americans are still in the country, and White House press secretary Jen Psaki pushed back against saying Americans are “stranded” in Afghanistan.

“I think it’s irresponsible to say Americans are stranded. They are not. We are committed to bringing Americans who want to come home, home,” Psaki said Monday at a press conference.