Fox News correspondent Chad Pergram has the latest on debates over the spending bill on R16;Special Report’

Rep. Alexandria Ocasio-Cortez, D-N.Y., wore a  white dress with the slogan “tax the rich” at the lavish Met Gala in New York, where tickets go for at least $30,000 each.

The wardrobe choice drew a mixed response on social media, with some praising Ocasio-CortezR17;s message and others questioning whether it conflicted with the star-studded nature of the event. 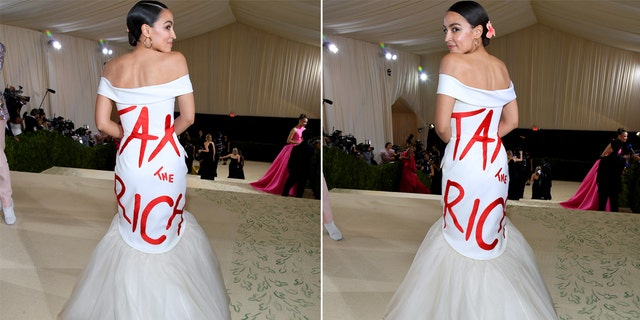 Tickets to the Met Gala cost at least $30,000, according to the Associated Press. It is unclear if Ocasio-Cortez purchased a ticket.

Ocasio-Cortez’s office did not immediately respond to a request for comment.

AOC posed maskless as she arrived, but attendees had to be vaccinated and were expected to wear masks once inside.

A self-described Democratic socialist, Ocasio-Cortez is one of the most prominent progressive voices in support of President Biden’s $3.5 trillion budget reconciliation package. She has repeatedly called for increased taxes on the wealthiest Americans to pay for progressive policy initiatives, such as climate-friendly infrastructure and expanded access to free healthcare.

During an interview on the red carpet, Ocasio-Cortez said she and the dress’ designer, Aurora James, discussed “what it means to be working-class women of color at the Met.”

“And we said, we can’t just play along, but we need to break the fourth wall and challenge some of the institutions, and while the Met is known for its spectacle, we should have a conversation about it,” Ocasio-Cortez said.

Ocasio-Cortez’s appearance at the Met Gala followed an earlier spat with Sen. Joe Manchin of West Virginia, a moderate Democrat who has opposed the sweeping $3.5 trillion plan favored by President Biden and progressive lawmakers.

The New York lawmaker ripped Manchin earlier this month for saying he would not support the plan, suggesting he “has weekly huddles w/ Exxon” and supported energy companies that were contributing to climate-related disasters. Earlier Monday, Manchin described the allegation as “totally false” and referred to the congresswoman as “young lady,” prompting a fiery response from Ocasio-Cortez.

“Imagine if every time someone referred to someone as ‘young lady’ they were ask responded to by being addressed with their age and gender? They’d be pretty upset if one responded with ‘the old man,’ right? Why this kind of weird, patronizing behavior is so accepted is beyond me!” she tweeted.