Lobbyists in Brussels waged a campaign against the rollout of the Pfizer-BioNTech COVID vaccine by claiming it was insufficiently European, a new book by the jab’s inventors has said.

Opponents allegedly told politicians last year that they should not order doses of the injection because BioNTech, a German company, had teamed up with US behemoth Pfizer rather than working with another company based in Europe. 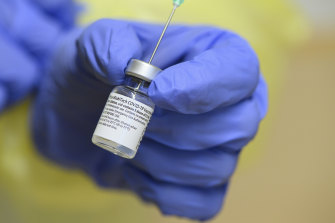 Deemed “un-European”: A vial of the Pfizer-BioNTech COVID-19 vaccine.Credit:AP

According to the book – written by journalist Joe Miller in collaboration with BioNTech’s founders Dr Ugur Sahin and Dr Özlem Türec – lobbyists branded Pfizer “the epitome of cold capitalism” and claimed: “If we give one euro to CureVac, or Sanofi, or a European company, it is one euro for Europe. If we give it to BioNTech, 50 cents will always end up in the US.”

It is not known what impact the lobbying effort had. However, the European Union only ordered doses of the Pfizer-BioNTech vaccine last November once efficacy data for the jab had been published – nearly five months after the UK and US.

Brussels is instead said to have favoured vaccines developed by French company Sanofi and German business CureVac. Both are yet to come to market.

BioNTech bosses claimed that there was a lack of support from the EU when they were developing the jab, saying the business felt “on our own” according to the book, The Vaccine.

Germany finally provided BioNTech with a €375 million ($605 million) grant last September – by which point, the authors say, the company had already “spent a couple of hundred million euros of its own money on raw materials and manufacturing, establishing Europe’s first dedicated COVID-19 vaccine production site without so much as a pre-order from the EU itself”.

The EU also took longer than other countries to approve the jab, which has since become the mainstay of its vaccine rollout. The European Medicines Agency suggested it was taking longer than the UK’s Medicines and Healthcare products Regulatory Agency as its procedure required more evidence and safety checks.

But Constanze Blume, BioNTech’s vice president of global regulatory affairs, rejects those claims in the book.