Senate Republicans, especially high-ranking members like Judiciary Committee Ranking Member Chuck Grassley and Minority Leader Mitch McConnell, remain adamant that they won’t help Democrats raise the debt ceiling even as the October deadline when the United States will default on its debt is fast approaching.

“If they have 50 votes for raising the debt limit and they’re in the majority… Why do they think Republicans ought to be involved when they’re in the majority?” Grassley, R-Iowa, told Fox News. “They want to spend this four and two tenths trillion – that’s one of the reasons why it’s got to go up so much – and no Republicans in favor of their programs. Why would we help them to get room in the debt limit to increase their budget.”

They say Democrats must raise the debt limit either in the reconciliation bill itself or through a separate reconciliation vehicle, because the GOP won’t help them as long as the majority is still trying to pass trillions more in spending along party lines. 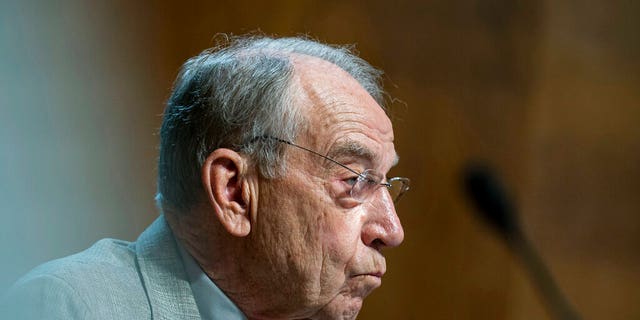 Sen. Chuck Grassley, R-Iowa, listens during a hearing of the Senate Judiciary Subcommittee on Privacy, Technology, and the Law, on Capitol Hill, Tuesday, April 27, 2021, in Washington. Grassley was adamant in an interview with Fox News that Democrats will have to raise the debt ceiling on their own via reconciliation. (Al Drago/Pool via AP)

Democrats want a bipartisan bill to raise the debt ceiling. Their plan as of now is to include the debt ceiling increase in a government funding bill later this year. Majority Leader Chuck Schumer, D-N.Y., accused Republicans of “playing dangerous political games” with the debt limit. And he said he believes Republicans will cave and “it will ultimately be done in a bipartisan way,” in part because business interests may pressure them to get on board.

“When they’ve got 50 votes, if they’re going to spend this four-and-two-tenths trillion, they’ll have to have the 50 votes to do it or they aren’t getting anything,” Grassley said. “So why are they coming to us, I don’t understand it?”

McConnell, R-Ky., struck a similarly defiant tone on the Senate floor Tuesday, indicating that the GOP is highly unlikely to cave on the position it staked out just over a month ago.

“This isn’t the last four years, when we were reaching bipartisan government funding agreements, bipartisan appropriations, and bipartisan COVID bills,” McConnell said. “Democrats are making different choices. They want to make policy all by themselves. So they can come up with the financing on their own as well.”

Treasury Secretary Janet Yellen said in a letter earlier this month that the Treasury Department’s “extraordinary measures” to prevent default after the suspension of the debt limit expired on July 31 are expected to run out in October.

If that happens it would have dire ramifications for the economy. The last time that the U.S. even came close to defaulting its credit rating was downgraded.

But Schumer appeared to leave the door open to Democrats raising the debt limit via reconciliation if Republicans still aren’t caving as the deadline gets closer.

“We are discussing all of the options with the president and with Speaker [Nancy] Pelosi,” Schumer said.