Douglas Murray: Teacher who resigned over critical race theory ‘should be applauded

In a defense for Virginia Democratic gubernatorial candidate Terry McAuliffe, Axios editor Margaret Talev claimed on CNN’s “Inside Politics” that critical race theory is “not actually a thing.”

During a Tuesday segment, CNN host John King discussed the backlash McAuliffe faced after admitting in a debate that he doesn’t think parents should tell schools what to teach.

“But Terry McAuliffe has sometimes, sometimes lets the tongue get out ahead of the brain. This is a debate scene where Terry McAuliffe says, schools, parents, why would I listen to them?” King said.

After airing the clip of McAuliffe sparring with Republican candidate Glenn Youngkin, King posed to Talev the challenge McAuliffe now faces with Northern Virginia parents. Talev agreed but also asserted that critical race theory is “not a thing anywhere in the country including Virginia.”

“Clearly a misstep. Let’s just say for the record in case anyone doesn’t know, they don’t teach critical race theory to kids in kids K-12 schools. That’s not a thing anywhere in the country including Virginia,” Talev said.

“Only for a Republican candidate,” King responded.

“It is hotly debated but not actually a thing,” Talev said. 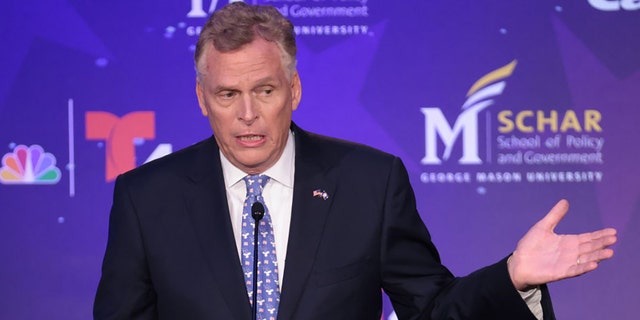 Talev’s statement echoed McAuliffe’s own assertions that critical race theory is “made up” and a “dog whistle” for far-right followers.

“It’s not taught in Virginia and it’s never been taught in Virginia,” McAuliffe said on Thursday. “And as I’ve said this a lot, it’s a dog whistle. It’s racial, it’s division and it’s used by Glenn Youngkin and others, it’s the same thing with Trump and the border wall, to divide people. We should not be dividing people in school.”

However, a new website called CriticalRace.org published a study on Oct. 4 that revealed 20 out of top 25 most elite K-12 private schools in America had some sort of curricular requirement change based off of anti-racism, Diversity, Equity and Inclusion (DEI), or critical race theory.

King and Talev continued to defend McAuliffe, claiming that his words were “a little out of context” and being “used against him.”

“[I]t sounds like what McAuliffe is trying to say I’m not going to let irresponsible parents who are against science terrorize school administrators and to make your kids unsafe. That’s actually not what he says. It’s just not what he said at all so, of course, it will be used against him,” Talev said.

“That’s the world we live in, right? Anything you say can and will be edited and used against you and well maybe it’s a little out of context,” Kind responded.

In recent weeks, polls have shown the race for Virginia governor tightening with Youngkin gaining support.