The second quarter of FY22 continued to show double digit growth for the top four IT services providers, with every vertical and geography growing well, even though the total contract value (TCV) looked soft for all the players. 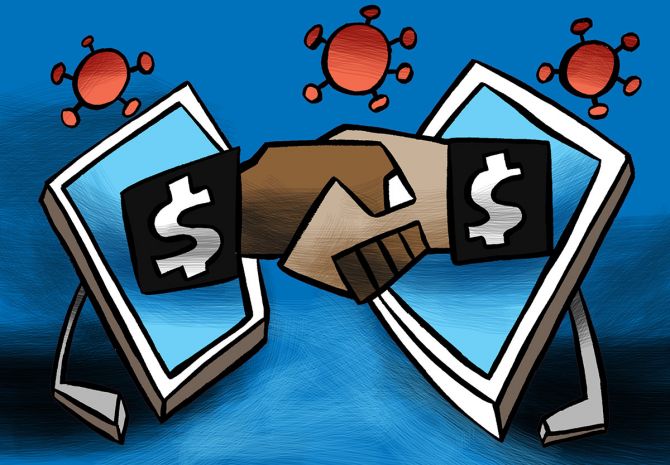 The trend was first evident in Accenture’s Q4 numbers, which saw its TCV in outsourcing deals softer.

A soft TCV does not mean that growth is declining, but it does point to the trend of few and scarcer mega deals.

Analysts Business Standard spoke to said that the soft TCV is a concern, but the near-term double-digit growth of the sector is strong.

“The total outsourcing deals to one vendor that we would see in the past have come down.

“One of the reasons is that the demand is now for cloud and digital and hence the majority of the deals are of that nature.

“Over the past few years, the trend has been towards multi-sourcing, where clients want to work with specialists,” said D D Mishra, senior director analyst at Gartner Inc.

The slowing down of large deals was also flagged by Accenture in its Q4 results.

The company reported outsourcing deal bookings at $7.1 billion, which is almost a 5.6 per cent decline year-on-year and a fall of 2.6 per cent compared to the average of the last four quarters.

Peter Bendor-Samuel, CEO, Everest Group, states that large deals are not off the table, but that the market is focused elsewhere, and those that do exist are being shared by more firms.

He also says that deals are getting competitive, but what is a factor this time around is the market timing and the demand-supply mismatch.

“Early on in an economic expansion we normally see the number of large deals slowing down.

“The post-Covid expansion seems to be following this historic trend. Linked to this is the talent market which is defined by demand exceeding supply and the resulting talent scarcity in all geographies and, in particular, low cost destinations such as India,” said Bendor-Samuel.

The impact of this talent crunch is also being felt on the client side.

Bendor-Samuel points out that every enterprise firm is scrambling to secure IT and engineering talent by growing their Captives/GBS, holding on to their existing employees and looking to the service provider community to meet the shortfall.

“This dynamic works against large deals which often transfer employees to the service provider and/or lay off employees.

“These deals also take a lot of executive time to push through and this time is now captured by securing enough talent and not saving money on existing talent,” he added.

The other trend that is impacting the large deal ecosystem is that deals are being broken into smaller sizes as clients want more specialised focus.

That is one of the reasons several mid-sized players with niche focus have seen a  jump in revenues.

Cases in point are Persistent Systems and KPIT Technologies, which work with large MNCs because of their different skill sets and focus.

This need to have a niche provider is also making deals complex in nature. Mishra says that the trend has been to engage with the best-of-breed providers for respective services bundles over the last few years.

“Five years back, a client would work with at the most 2-3 service providers, but that number has gone up to 5-6 providers per customer.

“This in turn makes the outsourcing ecosystem complex, which is making customers get into service integration management (SIAM) deals that creates a model where we are able to get the flavour of single-sources deals in a multisourcing environment,” Mishra added.

Analysts also point out that going ahead, the demand environment will  shift to digital and cloud which will sustain for a few more quarters.

The current high growth environment is being driven by two factors, the first is the post pandemic recovery, as firms catch up on projects that were delayed due to Covid-19.

The second factor is the rapid shift of almost all enterprises to digital platforms.

“When firms move into a platform, their IT and engineering spend does not peak and then diminish as it used to in the old IT spend model.

“The need for IT and Engineering talent continues to expand as the platform takes hold and evolves.

“Hence, we are seeing a change in the requirement for IT talent which looks to stress the talent supply chains for the foreseeable future.

“In other words, we are looking at a 5-year mega cycle where the demand for IT talent exceeds supply.

“This will drive strong growth for the IT and engineering service providers and we are likely to see the new normal for growth much higher than the pre pandemic levels,” said Bendor-Samuel.