‘Outnumbered’ panel weighs in on the Virginia governor race.

Less than a month before Election Day, McAuliffe’s campaign spent $53,680 on the services of the Elias Law Group, a firm that Marc Elias started earlier this year, Fox News previously reported. Elias had formerly worked as a partner at the law firm Perkins Coie, which the Hillary Clinton campaign hired in 2016 in order to conduct opposition research on Donald Trump – research that included the infamous Christopher Steele dossier. Republicans have accused Elias of lying to hide the Clinton campaign’s role in funding the dossier.

House Republicans accused Elias of having a “serious conflict of interest” when he represented Iowa Democratic candidate Rita Hart in her effort to overturn the results of her extremely narrow loss to Republican Rep. Mariannette Miller-Meeks. GOP members House Administration Committee said that Elias had a conflict because he and Perkins Coie – where he still worked at the time – also represented half of the Democratic committee members who would be deciding the case.

“There are a host of election lawyers but McAuliffe selected an attorney accused of lying to the media, advancing rejected conspiracy theories, and currently involved in a major federal investigation that has already led to the indictment of his former partner,” Turley wrote.

“McAuliffe may be preparing to challenge any win by Republican Glenn Youngkin,” he wrote on Twitter.

Fox News reached out to the McAuliffe campaign for comment on Turley’s suggestion. McAuliffe spoksperson Christina Freundlich responded to the email with a message apparently meant for colleagues, not for Fox News.

“Can we try to kill this,” Freundlich wrote. 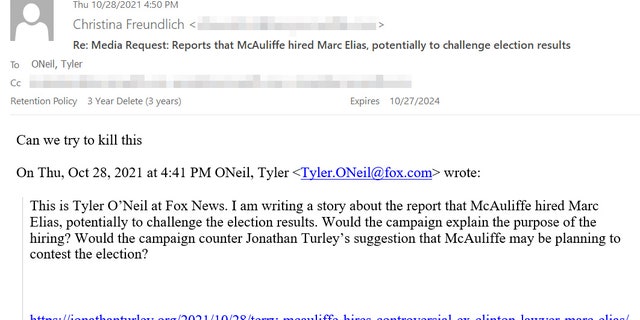 “To dispute the challenges of the election,” she clarified, ostensibly responding to an email that did not go through to Fox News. 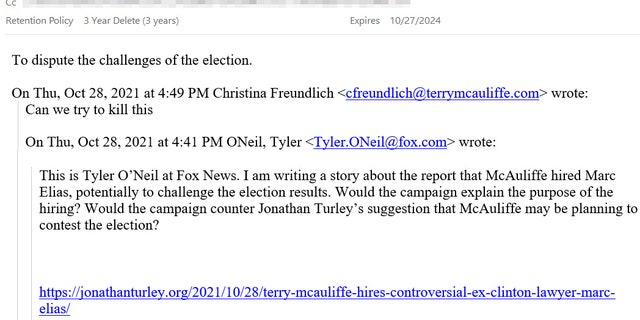 The McAuliffe campaign did not give any response to Fox News on the record.

Both McAuliffe and his Republican opponent, Glenn Youngkin, have pledged to “absolutely” accept the results of the election once certified.

Yet Turley raised concerns because McAuliffe has embraced Stacey Abrams’ claims about the 2018 Georgia gubernatorial race. 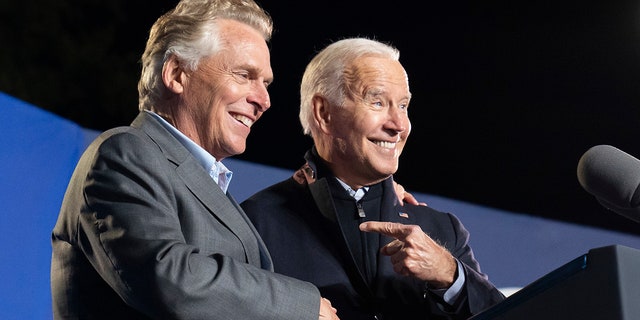 The Youngkin campaign did not respond to Fox News’ request for comment by press time.