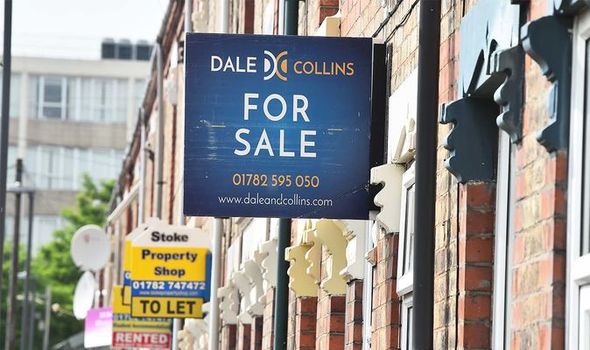 Inflation could put pressure on the Bank of England (BoE) to increase rates, which would have an impact on the cost of mortgages.

Experts have warned this will “add to the squeeze” household finances are already experiencing with increased energy and food prices, as well as increases in National Insurance payments. Sir Ed Davey, the leader of the Liberal Democrats, called it the biggest threat to homeowners since the 2008 financial crisis.

He described the situation as “a ticking mortgage timebomb” as documents from the Office for Budget Responsibility’s (OBR) showed a forecast for mortgage interest payments rising by 13 per cent by 2023.

Sir Ed said: “This is the worst time in a generation to be a homeowner.

“They face the toxic cocktail of interest rate rises, house price surges, and council tax hikes just around the corner.”

The OBR predicted that, in a worst-case scenario, interest rates would hit 3.5 per cent by 2023.

The forecasters believe this would have a huge knock-on effect.

An average mortgage borrower on a standard variable rate of 3.26 per cent would see their monthly mortgage payments soar 13 per cent, up to £42 a month, or £510 over a year, analysis by the Liberal Democrats showed.

A mortgage holder on a fixedrate mortgage of two per cent on the same property would see a rise of £24.90 a month or nearly £299 a year.

Nicola Schutrups, managing director of The Mortgage Hut, said: “Mortgage or rental costs generally account for about a third of people’s incomes and so rising prices in mortgages, energy prices, and other general costs that are required to live, such as spending on food, means that it squeezes out that discretionary spend at the top end.

“And that has an effect on the whole economy.”

Forecasts produced by the OBR suggested rising inflation may prompt the BoE to put up interest rates from the current 0.1 per cent to 0.75 per cent by the end of 2023.

Swen Nicolaus, chief capital officer at online mortgage firm Molo Finance, said: “The market expectation is that inflation will persist above four per cent for all of 2022 and into 2023, and on the back of that, to combat this high inflation, the BoE is expected to raise interest rates in the next year by about one per cent.

“This interest rate increase could start earlier, even in December this year, and this would be the first rise in over three years.”

NatWest has increased rates on a range of its fixed deals by 0.1 per cent, while HSBC said its rates would go up.

Martijn van der Heijden, chief financial officer at mortgage broker Habito, said: “Lenders have already been seen to be increasing their rates – NatWest upped theirs overnight, while TSB are increasing theirs – albeit by small amounts so far (0.10 per cent increases).

“Borrowers who are on a variable rate will feel the impact of inflation the greatest, even if the rate increases by as little as 0.25 per cent, this could see their repayments shoot up by hundreds of pounds a year, so it’s worth looking at all the options.

“For savvy homeowners, now is the time to fix, as for those on longterm fixes, rising inflation effectively eats into the value of their mortgage debt and offers protection from any further rises down the line.”

He said: “Generally, interest rates at the higher loanto-value end of the market are impacted most by rate rises due to their additional risk compared with lower loan-to-value cases.”

He said: “While the movement in rates is upwards, they remain historically cheap. Mortgage deals can be booked from three to six months before you actually need one, depending on the lender, so it is worth speaking to a broker and locking into a deal now if you are coming to the end of a fixed or tracker deal.”

A Barclays spokesman said: “We regularly review our product offering and make changes – where necessary – to ensure we continue to deliver a high level of service to the mortgage broker community and their clients. As a result of a recent review, some products across our Residential and Buy to Let ranges have seen price changes.

“These changes will come into effect from Friday.”

The change in rates from TSB is understood to have been agreed and approved before Wednesday’s Budget announcements.

Energy prices, food, taxes… the cost of everything else is going through the roof and now it’s the turn of mortgage rates.

News that Barclays, HSBC, NatWest and TSB are pushing up borrowing costs will only add to the country’s cost of living crisis.

The typical borrower could end up paying almost £400 a year more as a result, and there are more hikes in the pipeline.

The Bank of England is considering increasing interest rates at its next meeting on November 4, so this is happening sooner than many expected.

If the Bank does increase rates from today’s 0.1 per cent, anyone with a tracker mortgage will immediately see their interest repayments rise.

That is on top of energy bill increases, petrol costs, food bills and next April’s forthcoming 1.25 per cent National Insurance uplift.

Tens of millions will also be paying more income tax, too, as Chancellor Rishi Sunak’s froze the thresholds for five years.

Homeowners who have recently taken out a fixed mortgage will now be quietly patting themselves on the back for their foresight.

Unfortunately, the most popular mortgage fix lasts just two years, and many will expire just as interest rates start rising.

Those considering taking out a mortgage today should consider taking out a fixed rate of at least five years. As should anybody sitting on their lender’s standard variable rate.

There are still some good deals out there, even if the days of the sub-one per cent mortgages are numbered.

You can’t fix many costs these days – but you can still fix a mortgage. If inflation and interest rates take off, it could be one of the best financial moves you ever make.