New York (CNN Business)Facebook launched a television ad series recently that does not showcase any product for sale or new feature on its platforms. Instead, Facebook (FB) wants TV viewers to meet an employee named Jack.

Jack tells viewers he’s from New Orleans as he holds up what appears to be framed family photos. He says he is a member of Facebook’s content team and for the next 30 seconds, Jack is seen seated for a one-on-one conversation and answers one question: “What would you say is the most challenging about your job?” The answer comes down to “difficult” decision-making around content moderation on Facebook. But he says the government could help him by reforming Section 230 — a law that that protects companies’ ability to moderate content — and issuing other regulations. 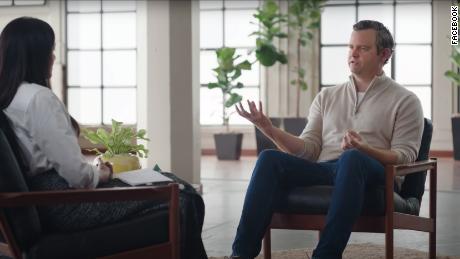 Why does that need to be a 60-second ad shown across TV networks like CNN and Fox News? The strategy aligns with much of advertising: Make the company look good. That is especially crucial for Facebook and other Big Tech companies that have been under scrutiny by their own employees, users, regulators and especially the media.

“The audience for these spots are the same people tuned in to network and cable channels where Big Tech is featured in the news and not always in flattering ways,” said Lance Neuhauser, president, commercial at Mediaocean, a global ad tech company. “Using the medium to showcase personal stories of rank-and-file employees who everyday people can relate to is a good way to balance the preponderance of images flanking the airwaves with Big Tech CEOs.”

Indeed, the humanizing effect of the soft lighting, music and personal anecdotes in the Facebook commercial stands in sharp contrast to how the company is being portrayed by the news media right now. A consortium of news outlets has been publishing a flood of damning stories — called The Facebook Papers — based on leaked internal documents that shed light on Facebook’s myriad problems.

Facebook has deployed a number of tactics in recent weeks to influence the narrative. With the journalists who are reporting out the Facebook Papers, the company has taken to Twitter to undermine their efforts. Then, amid the deepening crisis, Facebook announced last week that it is changing its corporate name to Meta, effectively demoting its namesake product to a subsidiary. For those watching television, there are these commercials, which started appearing in early October after former employee Frances Haugen blew the whistle on Facebook’s challenges.
Another ad in the same series features an employee named Rochelle, who also calls for more regulation. The majority of the ad impressions for both of Facebook’s recent commercials have come on Fox News, according to iSpot, a company that measures the performance of TV ads. 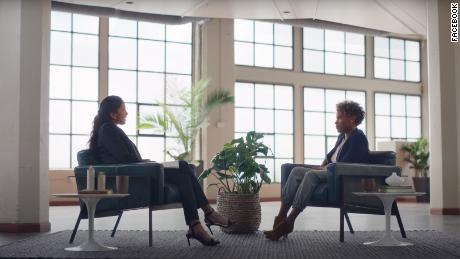 While CEO Mark Zuckerberg was out in full force for the unveiling of Meta, he is nowhere to be seen in these commercials. That could be in an effort to get Zuckerberg’s “face out of the limelight” when a consumer thinks about Facebook and privacy, said Beth Egan, associate professor of advertising at Syracuse University’s S. I. Newhouse School of Public Communications.
Zuckerberg has “become so demonized through all the Congressional hearings and everything that they’re trying to put on this friendly face,” Egan said. When asked about Zuckerberg’s absence in the ads, a Meta spokesperson pointed out that Zuckerberg has appeared in seven Congressional hearings since 2018, most recently in March, where has made the case for more regulation. The chief executive also wrote an op-ed in 2019 for The Washington Post that called for more regulation.
Spending money to push positive messaging is essentially advertising 101, but the tactic is especially blatant when companies are under scrutiny. Amazon (AMZN) has been running commercials featuring employees like Ernesto, who says in the ad that he worked as an Amazon warehouse associate before the company helped him with “training and tuition” when he decided to become a medical assistant. 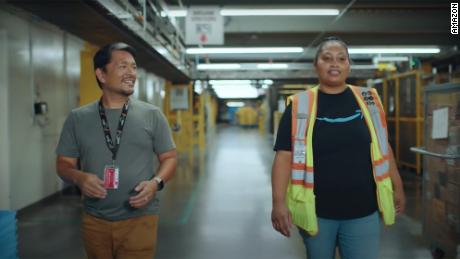 These types of ads are not new for Amazon. But the latest iteration landed over the summer amid more reports of “grueling” work conditions. Earlier this year, Jennifer Bates testified before the Senate Budget Committee about working 10-hour shifts at an Amazon facility and organizing a union. Her testimony prompted a deluge of negative headlines about worker mistreatment, a long reported problem at the online retailer. Much like in the Facebook ads, the employees depicted in the Amazon ads tell first-person anecdotes and are presented with soft lighting and uplifting music.
Amazon is “taking a page from Wal-Mart’s playbook and trying to put on the face of ‘We’re here for you. We’re doing good things for you,'” said Egan, referring to Wal-Mart’s ad campaigns from 15 years ago during a time when it was coming under heavy fire for its treatment of workers.
According to data from iSpot, Amazon’s “Meet Ernesto” ad ranks as the second highest spend of any individual TV commercial and the fifth most seen spot since its debut on August 30. Amazon has, according to iSpot, paid $43.4 million to run “Meet Ernesto,” which has garnered 3.33 billion impressions.
The ads with Jack and Rochelle are the third installment of a series about internet regulation. The previous installment featured people born in 1996 — Joshan, Adam and Chava — who share how the internet has changed since they were born.

Ads in which companies claim they are good for society will most likely become increasingly common as more consumers demand corporations align with their social values.
“It’s a societal shift, primarily driven by Gen Z, really focusing on I’m going to put my money where my mouth is,” Egan said. “I’m not going to purchase from companies who aren’t exhibiting and treating their employees the right way.”
Source: Read Full Article