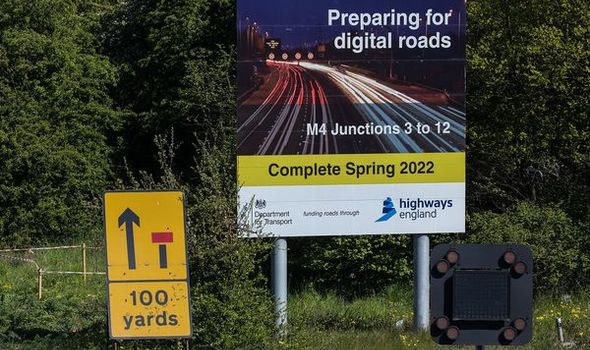 In a report released on Tuesday the Transport Select Committee argued the safety of all-lane-running smart motorways should have been fully addressed by Government and National Highways before the schemes were rolled out. The report concludes the scale of measures needed to address safety issues has been consistently underestimated by both the Department for Transport and National Highways. Smart motorways were intended to improve the flow of traffic by increasing the number of lanes available however this came at the cost of removing the hard shoulder. As a result smart motorways have been blamed for a number of accidents and deaths with a YouGov poll finding 64 percent of the public believed they were less safe.

On Monday protesters were seen outside the Department for Transport’s headquarters in central London carrying cardboard coffins.

The protest was organised by Claire Mercer whose husband Jason was killed in a lorry accident on the M1.

The Transport Committee previously carried out a report on smart motorways in 2016 and found the trade-off on safety unacceptable.

In response to the findings then the Government promised safety improvements and in 2020 Transport Secretary Grant Shapps set out an 18 point action plan.

However today’s report concludes the steps taken do not fully address the risks associated with removal of the hard shoulder.

Chair of the Transport Committee Huw Merriman said: “Only 29 miles of these all-lane running Smart Motorways have operated for over five years.

“It therefore feels too soon, and uncertain, to use this as an evidence base to remove the hard shoulder from swathes of our motorway network.

“The same evidence shows that other forms of Smart Motorways, where the hard shoulder is converted to a live lane at peak times of congestion, have lower casualty rates than removing the hard shoulder altogether.

“Despite this, the Government intends to replace these with all-lane running schemes.”

The report doesn’t go as far as to call for smart motorways to be scrapped but does make a number of recommendations to the Department for Transport including retrofitting emergency refuge areas into all-lane-running smart motorways at a maximum of one mile apart.

In addition it calls for the emergency corridor manoeuvre to be put into the Highway Code to help emergency service vehicles access incidents and for the commissioning of an independent evaluation of the technology used on smart motorways by the Office for Rail and Road.

Beginning in September 2022 it also suggests the Office for Rail and Road evaluate the Department for Transport’s progress.

DON’T MISS:
Caller shares ‘traumatising’ experience of breaking down on motorway [REACTION]
Energy bills could rise by hundreds of pounds amid BP warning [REVEALED]
Who are the Bank of England rate setters? [INSIGHT]

A spokesperson for the Department for Transport said: “We welcome the Transport Committee’s scrutiny and will now consider its recommendations in detail, providing a formal response in due course.

“This is a serious piece of work which we will engage with closely in the months ahead.

“We recognise that improvements have not always been made as quickly as they could have been in the past, but as the committee has set out, the Transport Secretary is absolutely committed to making Smart Motorways as safe as possible, including committing £500 million on upgrades and the faster rollout of Stopped Vehicle Detection.”

President of the AA Edmund King described the report as “pragmatic” adding: “We hope that the Government will respond quickly to these recommendations so that action can be taken to improve the safety of smart motorways and the public’s perception of these roads.”