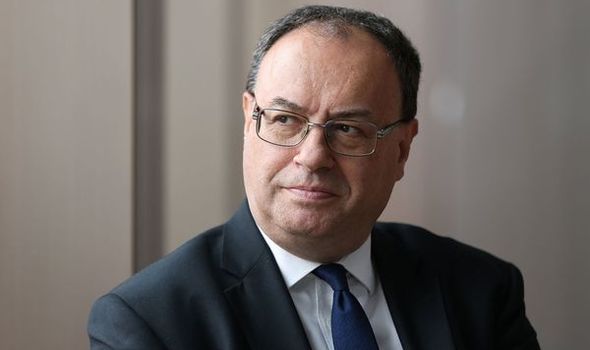 Speaking to BBC Radio 4’s Today programme Mr Bailey said he was “very sorry that’s happening” adding “none of us want to see that happen.” The Bank of England’s target for inflation is 2 percent and it is already running at 3.1 percent. Mr Bailey said: “Inflation is clearly something that bites on people’s household income.” “I’m sure they’re already feeling that in terms of prices that are going up.”

Currently, strains on the cost of living are growing with inflation reducing any impact of the wage rises announced in last week’s Budget.

Energy and fuel prices have been particularly hit with petrol reaching a record price of 143.7p per litre this week.

Speaking this morning Mr Bailey pointed out inflation was currently being caused by global “supply shocks” rather than high demand in the UK.

He explained: “Putting interest rates up, I’m afraid, isn’t going to get us more gas.”

In the weeks leading up to the decision speculation had been rife that the Bank would start increasing rates to try to bring inflation back under control.

Andrew Bailey himself had commented that the Bank would “have to act” to control inflation whilst Chief Economist Huw Pill had told the Financial Times November’s discussion would be “live.”

However, on Thursday the 9 person MPC voted seven to two against raising rates.

In the following hours the pound slid sharply against both the Dollar and the Euro in response.

The shock result led to accusations that Mr Bailey had become “unreliable boyfriend number 2” referencing his predecessor Mark Carney who was criticised over his mixed signalling on rate rises.

Former MPC member Danny Blanchflower told Express.co.uk there were now questions as to the Governor’s credibility saying: “He raised expectations and then had many opportunities to pull back on it.”

Speaking to the BBC this morning Mr Bailey rejected the label insisting that “at no point” did he or any member of the MPC say interest rates would rise in November.

Explaining the decision further he pointed to question marks over the labour market saying: “If you ask the question ‘why haven’t you done it now?”

“The answer is all to do with the labour market… there were a lot more people using the furlough scheme right up to the end.”

“The labour market looks tight in this country at the moment but the missing piece of evidence is just what has happened after the end of the furlough scheme and we don’t have any data to guide us on that.”

The Bank will next review interest rates on Thursday 16th December.