How do these Trevors make it look so easy? Each one – Trevor: The Musical, and its lead character Trevor: The Boy – carries a burden that could sink a more fragile theatrical creation, doom a less buoyant performance. But these Trevors persevere, and through sheer pluck, likability and smarts win over anything and anyone within the sound of their irresistible voices.

Opening tonight at Stage 42, the Off Broadway venue on Manhattan’s Theater Row, Trevor: The Musical is based on – and much expanded from – the Oscar-winning 1994 short film Trevor. Both tell the story of a 13-year-old boy whose unabashed flamboyance, Diana Ross obsession and slowly building crush on his jocky classmate suggest a development even Trevor only gradually sees forming: He’s gay, and it’s 1981, and the parents and classmates who once saw an outgoing, quirky little kid are starting to see something they don’t understand and, for some, don’t particularly like. Same, alas, goes for Trevor.

Remembered now more for the organization it inspired – The Trevor Project, still the world’s largest suicide prevention and crisis intervention organization for LGBTQ young people – the short film was a charmer, even if on a recent rewatching it seems slighter than in memory. In part that’s because of its own legacy – the little film itself couldn’t know how significant its impact would prove to be.

Twenty-seven years later, the musical adaptation has no such delusions. It knows – and we do too – that the charming and joyous first act must build to something dark – Trevor’s attempted suicide after being bullied – a development made all the darker by the lovability of both the Trevor character and the remarkable young actor, Holden William Hagelberger, who plays him. Just let anyone try to bully this kid, we can’t help thinking, and before that first pill is swallowed there just might be an audience uprising. 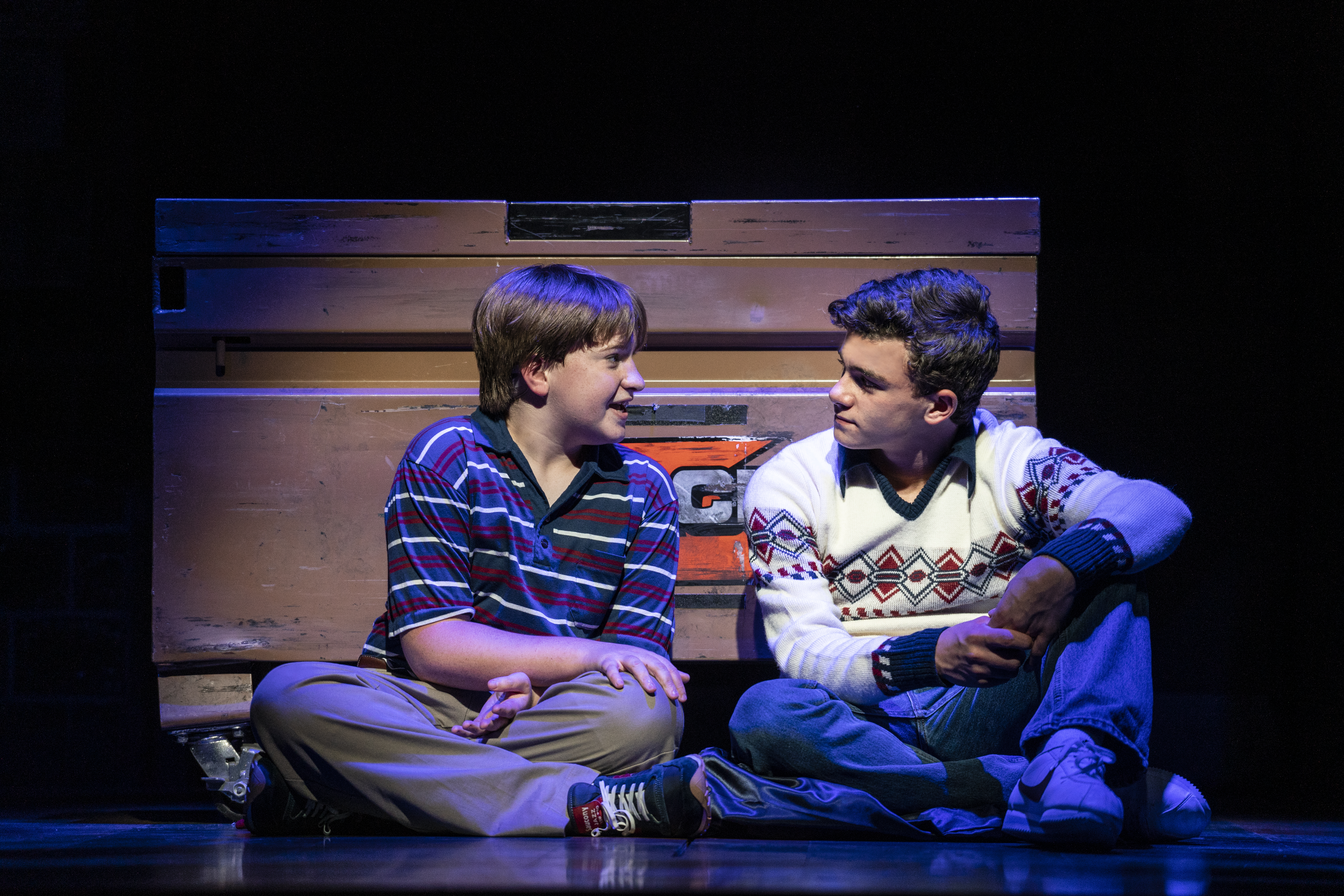 The premise, for those who didn’t see or don’t remember the film: Young unathletic Trevor, a little smarter and a whole lot gayer than the jocks he’s made to compete against in gym class, has his sights set on his junior high school’s annual talent show, where he’s certain he’ll wow the assembled with a performance from Fame – he’ll play all the roles, of course. His exuberance, an impressive knowledge of musical theater and a confidence bolstered by the encouraging words (in his mind anyway) of his idol Diana Ross combine to form one terrific kid who we, the audience, are certain will find his place in the world someday. But Trevor doesn’t know about someday yet.

When he fails to get a spot at the talent show – his teacher tells him his female impersonations simply are not done – the unstoppable Trevor finds the next best thing: He’ll direct and choreograph the basketball team’s annual dance performance, one of those sexist and homophobic farces in which the jocks don pink tutus and prance around the stage mocking everything they think they aren’t.

With the support of one of the athletes – the handsome, kind-hearted and family-stressed Pinky (a winning Sammy Dell), who initially finds in Trevor a kindred spirt of sorts – Trevor convinces the team to put on a real, Broadway-style song-and-dance routine, complete, in Trevor’s imagination anyway, with canes, kicks and top hats.

Trevor, of course, is falling in love with Pinky, mistaking the popular boy’s sweetness for something else entirely. When Trevor’s private jottings about Pinky are discovered by the requisite mean kids and made public, he loses everything – the song-and-dance number, his chance at school-wide fame and, most hurtful of all, his new friend, who fearfully lashes out with vicious cruelty that heretofore had been absent from the musical. 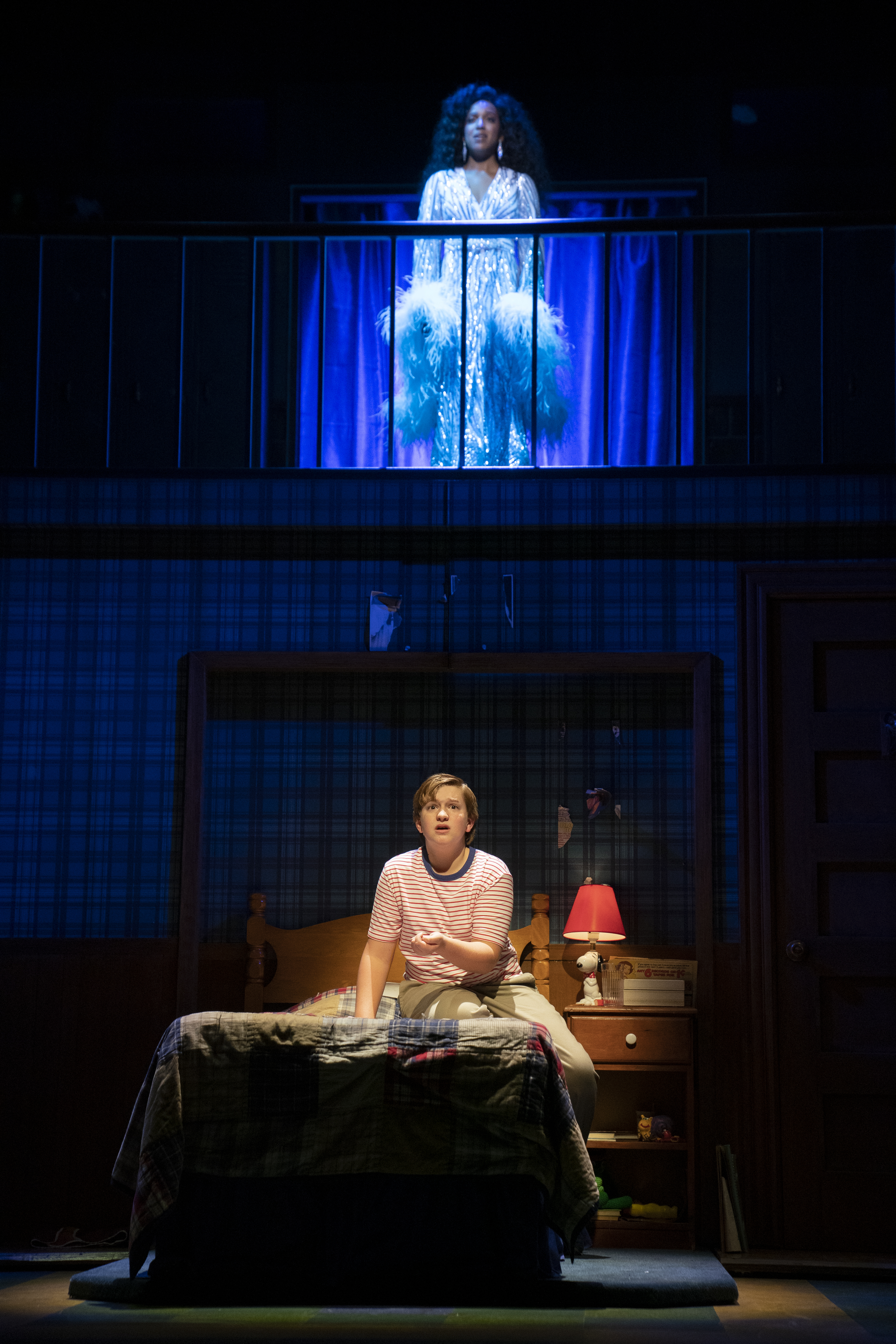 A spoiler here might actually reassure potential audiences: Trevor’s suicide attempt early in the second act is unsuccessful. But even so, the sight of this sweet and winning kid making even half-hearted attempts at self-harm – a scene involving battery wires and a protruding tongue goes from lighthearted to wrenching in seconds – can break your heart.

And that’s where Trevor: The Musical pulls off its most amazing trick: It doesn’t drop the burden of expectations, exactly, and it certainly doesn’t kick it off the stage when no one’s looking. Rather, the big-hearted pop musical widens itself to encompass its big-hearted message, persevering, like Trevor himself, over some rough patches with a blend of musical theater optimism, drama club earnestness and a delightfully catchy blend of new tunes mixed in with classics by the great Miss Ross herself (played here by the spot-on Yasmeen Sulieman as a sort of sprit guide bedecked in one gorgeous, glittery gown after another).

Not that Trevor: The Musical can completely hide its weaker points. The adult characters – parents, teachers, coaches, a priest – are stiff and unconvincing, with actors Sally Wilfert and Jarrod Zimmerman taking various roles with varying degrees of success. The adult exceptions: Sulieman and, in a relatively brief but impactful role, Aaron Alcaraz as the hospital volunteer who handles the musical’s It Gets Better moment with considerable charm, humor and powerful vocals.

All of this takes place on Donyale Werle’s cleverly designed stage encompassing high school hallways, classrooms, a bus and Trevor’s bedroom, an efficient and, when need be, dazzling (if at times a bit wobbly) set.

In fact, the same description might be used about some of the vocal performances of the young singer-actors populating Trevor’s school, a large ensemble cast occasionally showing more enthusiasm than expertise, though truth be told the approach adds to this endearing musical’s appeal. Director Marc Bruni guides them all with empathy and spirit, handling his cast with the same seamlessness that he brings to his presentation of the show’s musical numbers: Trevor, like the director’s Beautiful: The Carole King Musical, incorporates well-known songs – here, Ross’ “Do You Know?,” “It’s My Turn,” “Upside Down,” “Ain’t No Mountain High Enough” and the inevitable payoff “I’m Coming Out,” with the engaging Dan Collins-Julianne Wick Davis original score of bouncy pop tunes and soaring ballads.

That meld of familiar hits and newly written songs is accomplished so smoothly (Matt Deitchman is the music director, and Josh Prince contributes the lively choreography) that we can’t help wondering why more jukebox musicals, or jukebox-adjacent, can’t pull it off. Trevor: The Boy would no doubt love it, and that’s a pretty good recommendation for Trevor: The Musical.

Next ‘Transformers’ Moves Back One Year; ‘Star Trek’ Pic Set For Christmas 2023