A federal government-backed plan to turn Tasmania into a power hub supplying the big cities in the southeast of the mainland would be a costly dud, according to a Victoria University-linked energy researcher.

The plan to build out pumped hydro and wind generation and transport the electricity through a 250-kilometre undersea cable known as the Marinus Link would cost as much as $7.1 billion, the Victoria Energy Policy Centre said in a report. It would be preferable to build the same amount of generation in the form of lithium-ion grid-scale batteries directly in Victoria, the study showed. 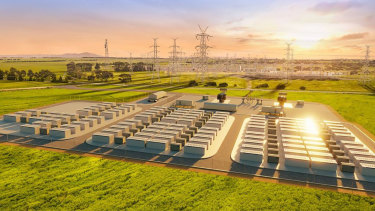 The Victorian Big Battery, which links dozens of Tesla Megapacks.Credit:Neoen

The Victorian Big Battery, which links dozens of Tesla Megapacks, will shortly be commissioned while a similar-sized unit at Jeeralan should be ready by 2026, according to the report by Bruce Mountain, the director of the centre. A further four major batteries are likely to proceed.

“Battery storage capacity will be built and operational in Victoria long before Marinus Link and the ‘Battery of the Nation’ developments in Tasmania are close to operational,” the report said. “Marinus Link continues to have no prospect of competing against battery alternatives in Victoria.”

The federal government last year committed almost $100 million in funding for Marinus Link and has formed a joint venture with the Tasmanian state government to progress the project through to a final investment decision expected in the 2024 financial year. It’s touted by advocates as a key facilitator for the clean energy transition in Australia, which still gets around two-thirds of its power from coal.

However, there is a risk that the project could end up building stranded assets, according to the report.

“Considering the much higher efficiency and responsiveness of chemical batteries than pumped hydro, if pumped hydro is developed in Tasmania it is surely likely that it, not batteries, will sit idle,” Mountain said.

Hydro Tasmania, which is leading the Battery of the Nation project, said that chemical alternatives won’t be able to provide all the storage requirements needed in future as they can only supply electricity over short periods such as one to two hours.

“It’s not a question of having one or the other,” the state-owned power company said. “We will need all the relevant, cost-competitive technologies to play their part to ensure all Australians have a power system that is reliable, secure and affordable.”