The national wages watchdog is taking Coles to court, alleging the supermarket giant massively underestimated the amount it shortchanged workers by and owes them more than $108 million.

The Fair Work Ombudsman announced on Thursday it had started legal action, claiming Coles had underpaid 7500 salaried employees a total of $115 million between January 2017 and March 2020, because it worked staff for more hours than they were formally paid for. 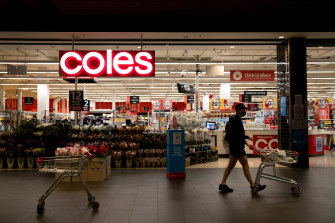 The national wage watchdog has alleged that Coles massively underpaid its workers.Credit:Janie Barrett

Forty-five of the salaried managers were allegedly underpaid more than $100,000 with the largest single underpayment $471,647. Affected staff, many of whom were also allegedly not paid proper penalty rates and allowances, were located in every state and territory across regional and urban areas.

Ombudsman Sandra Parker said businesses using annual salaries could not just assume they covered all entitlements. “This court action against Coles should serve as a warning to all employers that they can face serious consequences if they do not prioritise workplace law compliance,” Ms Parker said.

The wages watchdog will tell the court salaried managers typically worked one extra hour per shift between October 2017 and March 2020.

It alleges “Coles’ remediation program has significantly underestimated amounts owed to the employees and that more than $108 million remains outstanding”.

Coles faces penalties of $63,000 per breach of a range of industrial provisions, if proven.

In a statement to the stock exchange, Coles said it had started a review of pay arrangements for salaried employees paid under the retail award in February 2020 and said the ombudsman had begun its investigation afterward.

“Since that time Coles has been in communication with the FWO in relation to its investigation, including the interpretation of relevant provisions of the general retail industry award,” the statement reads.

It said Coles had so far spent $13 million on repayment costs and had made a provision for another $12 million in its accounts.

“Coles is currently reviewing the proceedings, which include issues relating to the interpretation and application of various provisions of the [General Retail Industry Award] and to the extent that further remediation may be required, we will update the market accordingly,” the statement says.

Coles admitted in February the company underpaid 600 staff $20 million over six years. At the time the company apologised to affected staff. When a class action was filed in May last year, Coles said: “Coles has committed to finalising its review and remediating affected team members as soon as possible.”