Viewing of Disney+ in the U.S. jumped 20% in November compared with October, according to Nielsen, as Thanksgiving time off coincided with the release of marquee programming.

The number was included in Nielsen’s monthly assessment of viewing across TV and streaming, The Gauge (see graphic below). The report does not include raw numbers, but reveals some noteworthy percentages and overall trends.

Broadcast TV fell one percentage point compared with October in terms of overall share, accounting for 27% of total viewing time, compared with 28% for streaming and 37% for cable. (The remaining 7%, classified as “other,” includes activities like DVR playback and viewing via game consoles.) Drama viewing on broadcast fell 12% and sitcoms by 7%, but sports on both broadcast and cable rose 7%, with NFL and college football even stronger than in recent years.

The surge for Disney+ helped the service climb to 2% of overall viewing, from 1% in recent months. Within the streaming category, Netflix remained on top in November with 7%, followed by YouTube at 6% and Hulu at 3%. (YouTube and Hulu numbers get an additional lift from viewership of their live TV packages.) Amazon Prime Video’s total share stayed flat at 2%, but total minutes of viewing rose 8% over the prior month.

Heavy promotions for Disney+ Day, November 12, appeared to yield results. Shang-Chi and The Legend of The Ten Rings and Jungle Cruise both arrived during the month, as did Peter Jackson’s Beatles docuseries, Get Back. “It’s not just kids,” Nielsen SVP of Product Strategy Brian Fuhrer noted in a video released with The Gauge. Get Back is “clearly not a young-audience-targeted program, but those three episodes did generate a lot of viewing.”

Feature film watch time ticked up 12% across the board, with Nielsen crediting the holiday season.

Here is November’s edition of The Gauge: 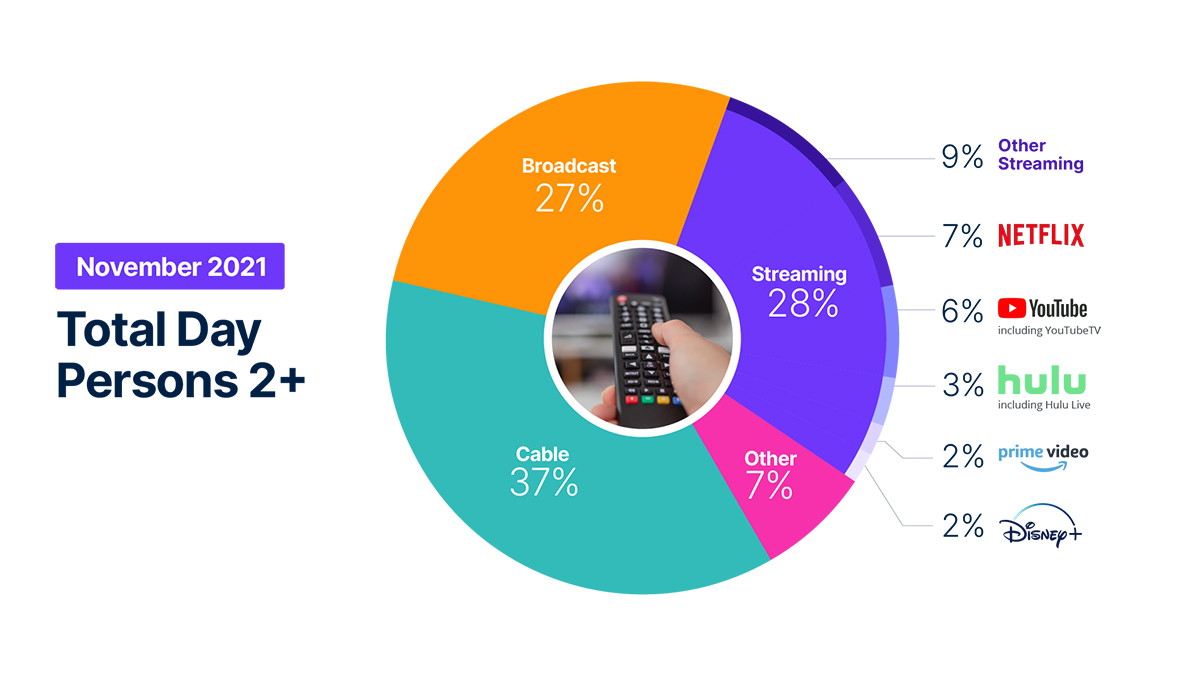