More than a third of Australia’s largest listed companies have poor modern slavery disclosures, indicating they don’t understand the risks in their supply chains, according to a new report.

Monash University researchers analysed the quality of 239 modern disclosure statements from ASX 300 companies, introduced after Australia created new laws to root out the problem, and graded each disclosure between A and F, in a report published on Tuesday. 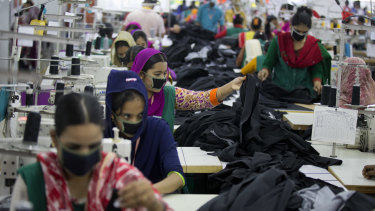 Garment workers in Bangladesh, which has been linked in the past to forced labour.Credit:AP

“Fail” grades were assigned to 36 per cent of companies, according to the report, while only six companies were given a top mark.

The research indicated a clear divide between the biggest and smaller firms in the quality of their statements, lead researcher Nga Pham said in a statement.

“While a handful of the nation’s biggest companies revealed exemplary efforts to address modern slavery in their inaugural statements, many others barely complied with the basic requirements of the law,” she said. “This is alarming as we are not confident that these companies fully understand their exposure to modern slavery risks in their operations and supply chains.”

“Modern slavery is one of the biggest human rights issues facing the world and as a leader in the resources sector, Fortescue recognises our vital role in working collaboratively with our suppliers, government and the community to address this issue,” said Chief Executive Officer Elizabeth Gaines.

Spokespeople for the other companies didn’t immediately respond to requests for comment.

Large companies with relatively high employee numbers and supply spending had higher quality modern slavery disclosure statements, according to the report. The most common type of risks cited were forced labour, child labour and debt bondage, it said.

Australia requires some 3000 companies that generate more than $100 million in revenue locally — from miners to banks and fund managers — to assess and detail how they’re managing slavery risks within their supply chain and to outline steps taken to fix any issues.

It’s an acute risk for Australian companies given that two thirds of the nearly 25 million people estimated to be in forced and debt-bonded labour globally are believed to be in the Asia-Pacific region, according to the International Labour Organisation.