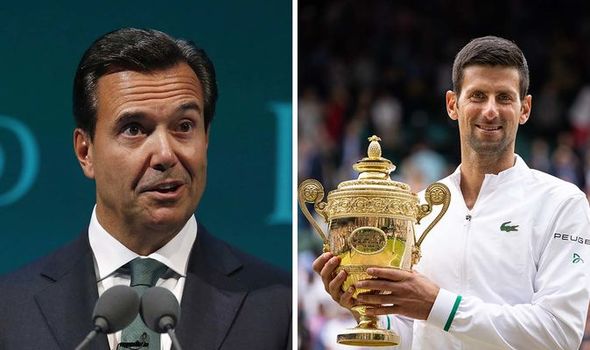 Antonio Horta-Osorio, now chairman of Credit Suisse, allegedly went to the tennis tournament in July, when virus restrictions required him to quarantine. The apparent breach was uncovered by his current employers as part of an investigation into a previous occasion when the Portuguese banker is said to have broken Covid-19 rules.

According to Reuters ‑ which revealed the findings of the probe ‑ 57-year-old Mr Horta-Osorio admitted to breaching Switzerland’s coronavirus regulations during a visit to the country on November 28.

These stipulated that he should spend 10 days in quarantine upon arrival. However, he is said to have left the country again on December 1.

According to Reuters, Credit Suisse’s legal team found that Mr Horta-Osorio broke the UK’s rules when he made the trip to attend Wimbledon last summer.

At the time, Switzerland and most other European nations were on Britain’s “amber list”, which meant visitors had to quarantine for 10 days when they arrived in the country.

The alleged breach happened after Mr Horta-Osorio left Lloyds Banking Group in April this year, when he joined Credit Suisse.

Reuters said the findings of the investigation by Credit Suisse’s legal team were passed to the audit committee on the bank’s board before Christmas.

It will now investigate the matter and decide whether any further action needs to be taken.

A Government spokesperson said it would not comment on specific cases, but added: “Passengers are responsible for ensuring they comply with all travel rules, including providing accurate information on their Passenger Locator Form, and failure to do so could lead to a fine or imprisonment”.