The world’s most valuable cryptocurrency has fallen to about $46,000 after surging to a record high near $69,000 in November. Yet Goldman Sachs (GS) said in a report this week that bitcoin (XBT) could more than double, to a little over $100,000 per coin, within the next five years.
“We think that bitcoin’s market share will most likely rise over time as a byproduct of broader adoption of digital assets,” Zach Pandl, the co-head of global foreign exchange, rates and emerging market strategy for Goldman Sachs, said in the report. 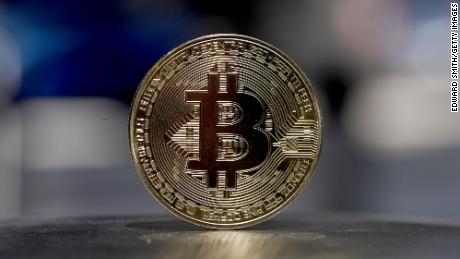 Pandl argues that bitcoin will increasingly steal market share from gold, which has stalled out around $1,800 per ounce.

He said bitcoin currently makes up about 20% of the so-called “store of value” market, a term used to describe gold, bitcoin and other alternative assets like currencies and commodities whose prices — in theory — should not depreciate much over a long period of time.

Pandl believes bitcoin could eventually make up 50% of the store of value market, which could push bitcoin about 17% to 18% higher annually for the next five years to top the $100,000 level.
“We think that comparing its market capitalization to gold can help put parameters on plausible outcomes for bitcoin returns,” Pandl added.

Of course, bitcoin and other top cryptos such as ethereum, binance, solana and meme tokens like dogecoin and shiba inu have been extremely volatile in the past year. Cryptos are behaving more like stocks than currencies at this point.
Still, an increasing number of top fund managers including Stanley Druckenmiller, Paul Tudor Jones and George Soros have invested in bitcoin. Regulators have approved exchange-traded funds that track bitcoin futures prices too, making it even easier for individual investors to dive in.
Source: Read Full Article