In media news today, a Utah newspaper calls for the National Guard to prevent the unvaccinated from going anywhere, lawmakers call on NBC to cover human rights protests during the Winter Olympics in China, and CNN frets about Biden’s press treatment.

The Associated Press raised eyebrows on Monday in a profile highlighting Jill Biden’s first year as the First Lady.

“Her husband campaigned to help unite the country, but Jill Biden says ‘healing’ a nation wounded by a deadly pandemic, natural and other disasters and deep political polarization is among her chief roles as first lady, too,” the AP began its article.

Biden spoke with the AP after visiting families affected by wildfires in Colorado, telling the news wire service, “I didn’t kind of expect, which was like a healing role, because we’ve faced so much as a nation.” 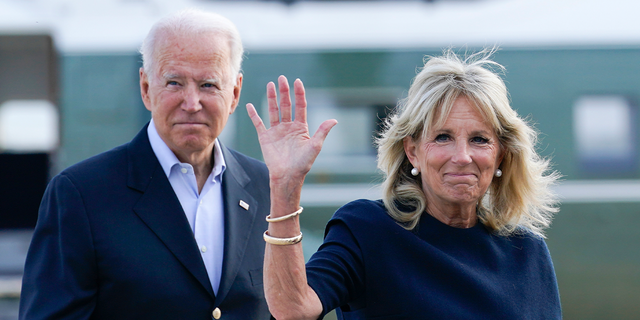 The first lady additionally told the AP, “I would want to know that my president and first lady cared about me… I think that’s an important part of what I do. I mean, just helping people through the tough times.”

“Her visits to Colorado and to see victims of a deadly Christmas parade crash in Waukesha, Wisconsin, and a trip last Friday to tornado-ravaged areas of Kentucky are a ‘prime example’ of the responsibility she feels, she said. It’s what she would want as a regular person who survived a natural disaster or other tragedy,” the AP wrote.

Promoting its article on the first lady, AP tweeted, “Jill Biden tells @AP healing a nation became one of her chief roles as first lady over the past year. ​Her travels to 35 states have included visits with wildfire victims, those affected by deadly tornadoes and victims of a deadly Christmas parade crash.” 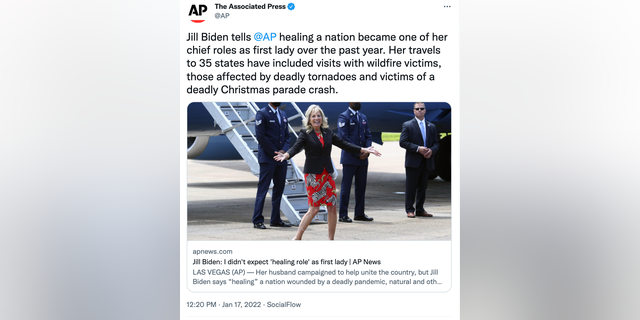 Critics bashed the AP for watering down the murderous attack committed by Darrell Brooks that left six dead and 62 others injured.

“Yeah, what was that ‘deadly Christmas parade crash’ all about, AP?” NewsBusters managing editor Curtis Houck asked, adding, “Care to point out she only showed up weeks after it happened?”

“It wasn’t a car accident. It was a mass murder,” DeSantis press secretary Christina Pushaw wrote. “But because the murderer’s political ideology is useful for you, you obscure the facts. American Pravda.”

“‘Christmas parade crash’ – it was deliberate murder – not accidental, not in the heat of the moment – of children and old people. And this is their headline,” writer Gigi Levangie similarly tweeted.

The Associated Press did not immediately respond to Fox News’ request for comment.

Brooks was out on $1,000 bail in November after a woman accused him of punching her and using his car to run over her, which was the same vehicle used in the Waukesha attack.

His criminal record dates back to 1999. He was convicted of statutory sexual seduction in 2006 after having sex with a 15-year-old girl, who later became pregnant.