Profits at major supermarket Coles have been crimped for the first half of the financial year as the retailer was forced to spend millions on rapid tests and additional workers as COVID heavily affected operations.

On Tuesday, Coles reported a slight uptick in sales for the six months to the end of December, with revenue at the business increasing 1 per cent to $20.8 billion for the half as the business was again a beneficiary of heightened grocery spending through lockdowns. 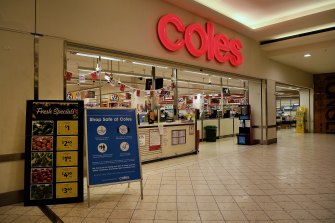 Coles said it incurred $150 million in additional COVID-related costs for the half, largely within the company’s supermarkets division and was related to worker isolation requirements, rapid antigen tests for staff, and the cost of hiring additional workers to ensure customers were scanning QR codes on entry.Credit:Kate Geraghty

However, earnings before interest and tax fell 4.4 per cent to $975 million as the major retailer weathered a massive increase in COVID-related costs as the Delta outbreak through the beginning of the half wreaked havoc on the company’s supply chains and workforce.

This result was in line and even slightly ahead of analyst expectations, which had predicted EBIT of around $965 million.

Coles said it incurred $150 million in additional COVID-related costs for the half, up from $105 million in the prior period. This was largely within the company’s supermarkets division and was related to worker isolation requirements, rapid antigen tests for staff, and the cost of hiring additional workers to ensure customers were scanning QR codes on entry.

“I would like to thank our team members, suppliers, community partners and state and federal governments for their incredible efforts during the latest waves of Delta and Omicron, and the flood-related road and rail recovery operation for Western Australia which have been highly disruptive,” chief executive Steven Cain said.

“I would also like to thank our customers for their support during periods of reduced product availability in store which is now improving on the Eastern seaboard.“

At the company’s supermarkets division, sales gained 1.1 per cent to $18 billion. Liquor sales had a stronger half, up 2.7 per cent to $2 billion off the back of stronger e-commerce sales. However, Coles’ Express petrol station business saw revenue slide 8.5 per cent to $578 million and earnings more than halve as lockdowns significantly reduced petrol volumes over the period.

For the start of the second half, Coles said trade started off strong due to the Omicron outbreak, before moderating later in January. Across states, sales have variated significantly, the retailer said, and an additional $30 million in costs were incurred during the month.

The retailer also flagged it was uncertain if it would incur additional remediation expenses from fresh court action brought by the Fair Work Ombudsman, which has claimed that the company has underpaid staff by as much as $108 million, far more than Coles previously stated in February 2020.