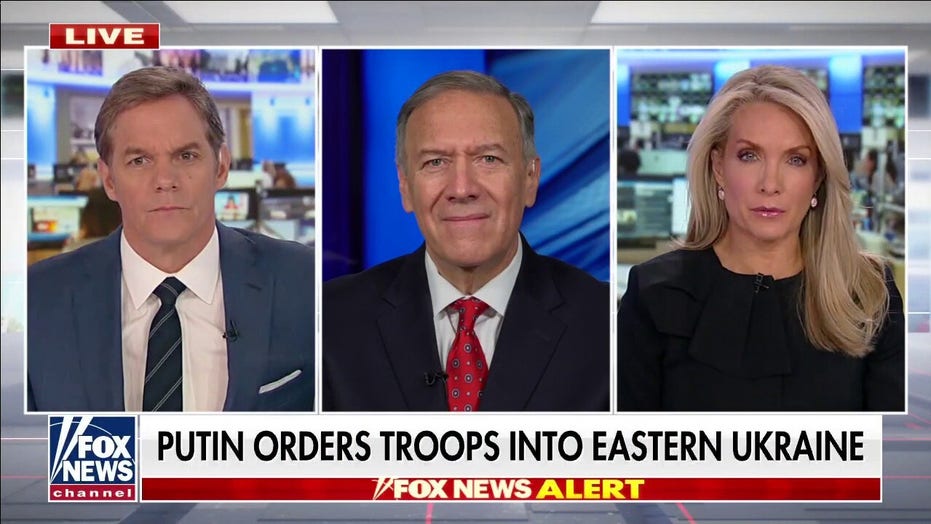 The Fox News contributor joined ‘America’s Newsroom’ to discuss how the Biden administration has handled the Russia-Ukraine conflict as tension heightens.

Time for Biden to shift into battle mode. Biden can seize the initiative first by unleashing the massive sanctions he’s been boasting about for weeks.

The longer Biden waits, the greater the risks that Putin will move more military forces on the rest of Ukraine.

Putin wants the world to shrug it off. Russian war games stoked the scheme. Since Russia’s not bombing Kyiv as the White House, Joint Chiefs of Staff Chairman Mark Milley and others kept describing in lurid detail, the false sense of relief will slacken world response.

So far, that’s working. China called for restraint. Europe is in a dither over whether it’s a real invasion or not. NATO has not even activated the NATO Response Force it built up after the 2014 Russian annexation of Crimea. Just like Biden disastrously predicted back on Jan. 15.

Time for the U.S. to step up. Biden should kick Russia out of the SWIFT banking system, target the personal bank accounts of Putin and his friends, and stop the NordStream 2 pipeline.

Biden has another unique and major task. He’s got to get the U.S. military ready to help when Ukrainian President Volodymyr Zelenskyy asks. It’s time for bright red lines.

Diplomacy is done. Put Secretary of State Antony Blinken and crew on the bench and never mind the U.N.  The China-Russia “Dragonbear” have the Security Council on ice so the U.N. won’t help Ukraine.

Looks like Biden is incapable of doing this alone. So Biden should urge the U.S. Senate to pass its “mother of all sanctions” bill. Biden should stand with British Prime Minister Boris Johnson and any other strong allies, like Australia, and condemn Russia and back up words with deeds.

Putin’s hatred of America rang out from his ranting speech Monday night when he called Ukraine a U.S. puppet. Putin’s delusions make him so dangerous he’s beyond appeasement. The only way to push him back is with harsh, immediate sanctions and direct military help to Ukraine.

NATO is united by the Russia threat but if Biden fades then Europe may back off and accept the “new normal” of an aggressive Russia. Simmering resistance or a crush of dissent by Russia in Donetsk and Luhansk will humiliate NATO. Another win for Putin.

It’s great to see Germany taking action on Nord Stream 2. German Green Party officials never liked the second pipeline anyway. But most of all, the German resolve sends the right signal to China.

Don’t forget, China is keeping score in Putin’s face off with Biden and the West. Beijing is happy to see Putin hammer Biden and Xi Jinping will calculate all his next moves in the Pacific based on Biden’s actions in support of Ukraine.