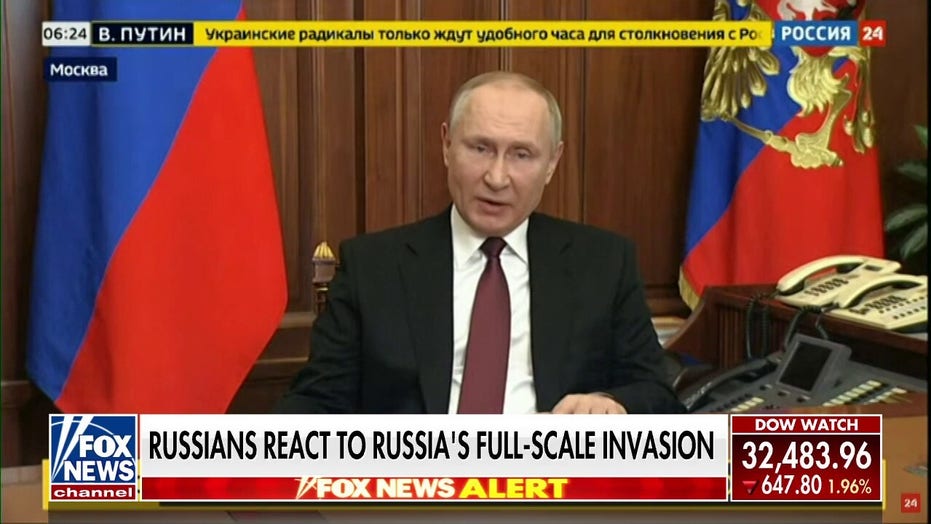 Putin giving off sense of ‘disgust with the West,’ wants to ‘overturn’ world order: Amy Kellogg

House Minority Leader Kevin McCarthy Thursday slammed Russian President Vladimir Putin as “evil” over his war on Ukraine, and called for him to face massive backlash for the invasion.

“Vladimir Putin’s invasion of Ukraine is reckless and evil. The United States stands with the people of Ukraine and prays for their safety and resolve,” McCarthy, R-Calif., said. “Putin’s actions must be met with serious consequence. This act of war is intended to rewrite history and more concerning, upend the balance of power in Europe. Putin must be held accountable for his actions.”

Russia began a full-scale invasion of Ukraine from multiple fronts Wednesday evening U.S. time. Putin declared a “special military operation” in the country in a pre-recorded video from earlier this week that was broadcast early Thursday morning Russian time.

Air raid sirens and explosions could be heard in Kyiv, Ukraine’s capital, throughout Thursday. Massive plumes of smoke were also visible in the area.

McCarthy’s comment is one of many similar statements from members of Congress about the Russia-Ukraine war. But he’s the first party leader in Congress to release a statement since Russia’s invasion began in earnest late Wednesday U.S. time.

Senate Majority Leader Chuck Schumer, D-N.Y., hasn’t made any unilateral comments on the Russia-Ukraine war since Russian troops first entered Ukraine. He did, however, join a bipartisan statement standing with Ukraine last week.

President Biden Wednesday condemned Russia’s war as “an unprovoked and unjustified attack” and promised to levy tough sanctions against Russia. Biden also said he spoke with Ukrainian President Volodymyr Zelenskyy early Thursday and said, “We will continue to provide support and assistance to Ukraine and the Ukrainian people.”