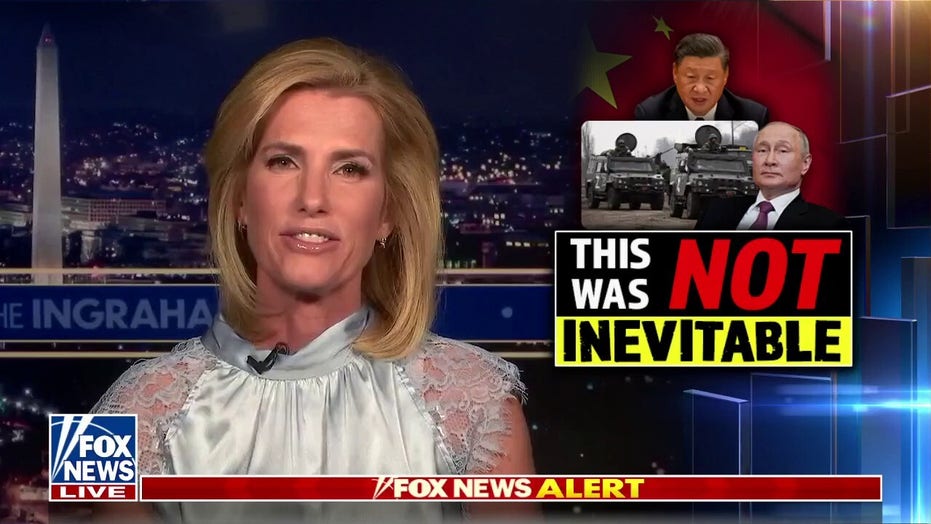 Angle: This was not inevitable

“This invasion, in many ways, was made in China,” she said. “And the goal is to test the waters for an attack on Taiwan. And once [President] Xi [Jinping] thinks that he can invade Taiwan, he will. But right now, there are steps that we could and should immediately take to stop that from becoming an inevitability, and make Xi just maybe realize that he’s underestimated the resolve and the strength of America.”

American actions “could make him think twice about further cooperation with Russia,” she said, noting the necessity of beginning “what will be at times a very painful” decoupling from China.

“The very idea that the administration thought that they could get the CCP to act in our interest is delusional,” Ingraham said, adding “that’s the thinking of someone who knows literally nothing about the way our biggest adversary operates.”

“Yet that’s been the exact mindset of Biden’s China point man [John Kerry] for over a year now.”

China is funding Russia’s war on Ukraine by buying its energy and wheat, she said.

For the United States to decouple from China, Ingraham suggested raising tariffs to make products in America, “delinking our manufacturing on key technologies” and canceling the student visas of the 340,000 Chinese students studying stateside.

“Why are we training China’s next generation, all of whom are approved to be here by the CCP?” she asked. “Why are we training them in STEM fields? And at some point down the road, we know they’re just going to turn around and use what they’ve learned here against us, or our allies.”

She dubbed both Xi and Putin as “unfailingly ruthless and supremely nationalistic,” saying “they exploit weakness wherever they see it, whether it’s financial or cultural.”

“So Russia and China respect only strength, and this administration has shown them only weakness from day one.”