The Bookers knew the floods were coming. When the warnings reached Lismore, the family moved the cars to higher ground and prepared backpacks with essential items.

But the waters came in faster than anyone expected and at 3.30am on Monday, a loud noise woke the family. Water had entered the second storey of their four-bedroom home, so Rachel Booker and two children fled with the help of emergency services to an evacuation centre in town.

But 68-year-old father Joseph stayed behind to protect the animals. 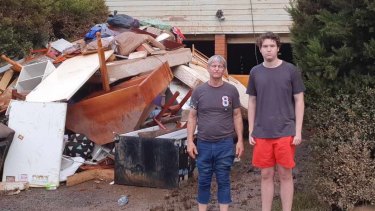 Joe Booker and son Benjamin outside their Lismore home that was destroyed in the floods. Credit:Rachel Booker

As morning broke, the waters continued to rise rapidly and the family were worried about Joseph who had no mobile phone. They sent a friend over with a boat in the early afternoon, fearing for his safety. When they arrived, the house was almost fully submerged.

Joseph was found standing on the kitchen bench, water up to his neck, holding a basket filled with animals. His head was touching the ceiling. The friend had to swim into the house, put a rope around Joseph and pull him out.

“Then I was the person still left in the house with the guinea pigs, chickens, rabbits, fish. Trying to keep them up and up and up. I kept lifting everything in the house up,” he says with a chuckle. “I wasn’t laughing then. I was shaking, everything. Hypothermia, shock, all that.”

The water has now receded and the family is sorting through the wreckage of their home of more than 14 years. Many of the animals drowned, but Joseph is now tending to the survivors. The supermarket shelves were bare on Thursday, his youngest daughter’s 13th birthday.

“She’s been shovelling muck out of the house. She didn’t get a birthday, no food, no nothing. I’m not complaining. There are thousands of others in a worse predicament than us,” Joseph says.

Joseph’s oldest daughter, Jemima Fritts, lives in Alice Springs and has been doing all she can from afar. This week she began lodging the family’s insurance claim with Allianz but has made little progress.

“I’m getting constantly stumped at each stage. There’s no way you can call them. It’s a minimum four-hour wait. When I do get through, I get told you’re not on the policy,” Fritts says.

The house has flooded three times in 10 years. First, the water reached the front stairs, then the bottom level, now it’s the entire house. “It’s a write-off,” says Joseph.

The Bookers have always paid for the highest level of insurance cover, but after three flood events, premiums have gone up by thousands of dollars. A car crash almost killed Joseph in the 1980s leaving him on the disability pension.

Joseph knows the premiums will keep rising, but that won’t stop him buying insurance.

“We will just manage. If you can’t manage, then you can’t live, then what do you do? One day there is a point where you say I will get milk and bread for the kids rather than pay the insurance because I can’t pay it.” 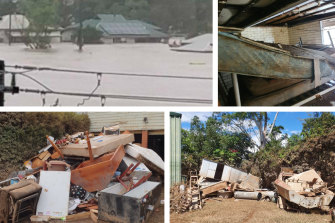 The Bookers’ family home (top left) is a write-off after it was almost fully submerged by water in the Lismore floods. Credit:Rachel Booker

Pricing insurance is about calculating risk and as climate change causes natural disasters to become more extreme and frequent, the risk profile for coastal and river communities is rising, Guse says.

He expects the cost of reinsurance – insurance for insurers – will increase by between 10 and 20 per cent after this event, which will translate into even higher premium increases for those directly affected.

The federal government has sought to keep premiums affordable by subsidising insurance. From July, a $10 billion pilot program will be rolled out in northern Queensland aimed at reducing premiums for people living in flood and cyclone-prone areas.

“Homeowners and businesses have been faced with crippling insurance costs, and in some cases, can’t get insurance at all,” Prime Minister Scott Morrison said last year when unveiling the policy. “It’s not OK, and we’re going to change that.”

Liberal MP Warren Entsch wants the government to extend the so-called ‘reinsurance pool’ to cover natural disasters, including floods and bushfires, in other parts of the country.

‘Let’s create a more resilient Australia … Let’s not push the problem somewhere else.’

But this policy is not widely supported by the industry. “All that would do would be to pass the buck from the private sector to the public sector,” Suncorp chief executive Steve Johnston told ABC RN on Friday morning. “From the private insurance market to the taxpayer.”

Insurers are bracing for the biggest flood claim event in history. Insurance Council of Australia on Friday reported 67,537 claims had been lodged so far, with the total number continuing to rise. Morningstar analyst Nathan Zaia says Australian insurers’ profit margins are already under pressure and rising reinsurance costs will make matters worse.

“At the moment, they’re trying to reprice for claims inflation, investment income is still weak. If you get a jump in your reinsurance price on top of that, it’s hard to recoup all of them. It definitely would hit their bottom line,” Zaia says.

Solve My Claims director David Keane says the recent flood event is unprecedented. After the Brisbane floods in 2011, insurers amended policies to ensure everyone was covered for floods unless they opted out, meaning the total claims will be much higher even before NSW is taken into account.

“This is likely going to be the biggest flood event from an insurance perspective we’ve ever seen,” Keane says.

But Keane, who assists policyholders with claims disputes, says there are “flow on factors people don’t think about”, including forced homelessness and crippled supply chains.

“When you have a town where the whole town has gone under, Lismore, even if they’re fully insured, it will take 12 to 18 months until that house is reinstated and they can move back home. Where do they live? The policy might cover you for alternative accommodation, but where do you go if the whole town has been flooded?

“Then you have already the supply chain crisis because of COVID and other disasters for building materials. How many thousands of people have to replace their whole homes? How many dining sets, lights, beds, all of that. What sort of pressure does that create?”

The current floods crisis will no doubt intensify the national discussion around disaster resilience, climate change, insurance and building permits for high-risk areas. But for Joseph Booker, the reality of the next few months is only just starting to sink in. “Where am I going to get materials when I can’t even buy a loaf of bread or a bottle of milk?”