Beware, Vladimir Putin: Spring is coming. And when it does, you’ll lose much of whatever leverage you had left.

Before Putin invaded Ukraine, I might have described the Russian Federation as a medium-size power punching above its weight in part by exploiting Western divisions and corruption, in part by maintaining a powerful military. Since then, however, two things have become clear. First, Putin has delusions of grandeur. Second, Russia is even weaker than most people, myself included, seem to have realised. 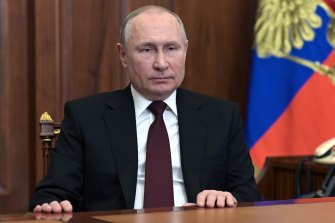 It has long been obvious that Putin desperately wants to restore Russia’s status as a Great Power. His already infamous “there is no such thing as Ukraine” speech, in which he condemned Lenin (!) for giving his neighbour what Putin considers a false sense of national identity, made it clear that his aims go beyond re-creating the Soviet Union — he apparently wants to re-create the czarist empire. And he apparently thought that he could take a big step toward that goal with a short, victorious war.

So far, it hasn’t worked out as planned. Ukrainian resistance has been fierce; Russia’s military has been less effective than advertised. I’ve been especially struck by reports that the early days of the invasion were hampered by severe logistical problems — that is, the invaders had a hard time providing their forces with the essentials of modern war, above all fuel. It’s true that supply problems are common in war; still, logistics is one thing advanced nations are supposed to be really good at.

But Russia is looking less and less like an advanced nation.

The truth is that I was being generous in describing Russia as even a medium-size power. Britain and France are medium-size powers; Russia’s gross domestic product is only a bit more than half as large as either’s. It seemed remarkable that such an economically underweight state could support a world-class, highly sophisticated military — and maybe it couldn’t.

That’s not to deny that the force ravaging Ukraine has immense firepower, and it may well take Kyiv. But I wouldn’t be surprised if post-mortems on the Ukraine war eventually show that there was a lot more rot at the heart of Putin’s military than anyone realised.

And Russia is starting to look even weaker economically than it did before it went to war.

Putin isn’t the first brutal dictator to make himself an international pariah. As far as I can tell, however, he’s the first to do so while presiding over an economy deeply dependent on international commerce — and with a political elite accustomed, more or less literally, to treating Western democracies as their playground.

For Putin’s Russia isn’t a hermetic tyranny like North Korea or, for that matter, the old Soviet Union. Its standard of living is sustained by large imports of manufactured goods, mostly paid for via exports of oil and natural gas.

Putin may well take Kyiv. But even if he does, he will have made himself weaker, not stronger. Russia now stands revealed as a Potemkin superpower, with far less real strength than meets the eye.

This leaves Russia’s economy highly vulnerable to sanctions that might disrupt this trade, a reality reflected in Monday’s sharp plunge in the value of the rouble despite a huge increase in domestic interest rates and draconian attempts to limit capital flight.

Before the invasion it was common to talk about how Putin had created “fortress Russia,” an economy immune to economic sanctions, by accumulating a huge war chest of foreign currency reserves. Now, however, such talk seems naive. What, after all, are foreign reserves? They aren’t bags of cash. For the most part they consist of deposits in overseas banks and holdings of other governments’ debt — that is, assets that can be frozen if most of the world is united in revulsion against a rogue government’s military aggression.

True, Russia also has a substantial amount of physical gold held within the country. But how useful is this gold as a way to pay for things the Putin regime needs? Can you really conduct large-scale modern business with ingots?

Finally, as I noted last week, Russia’s oligarchs have stashed most of their assets overseas, making them subject to freezing or seizure if democratic governments can muster the will. You might say that Russia doesn’t need those assets, which is true. But everything Putin has done in office suggests that he considers it necessary to buy oligarchs’ support, so their vulnerability is his vulnerability. 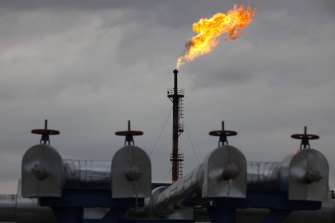 Incidentally, one puzzle about Russia’s pre-Ukraine image of strength was how a kleptocratic regime managed to have an efficient, effective military. Maybe it didn’t?

Still, Putin has one remaining ace in the hole: Feckless policies have made Europe deeply dependent on Russian natural gas, potentially inhibiting the West’s response to his aggression.

But Europe mainly burns gas for heat; gas consumption is 2.5 times higher in the winter than it is in the summer. Well, winter will soon be over — and the European Union has time to prepare for another winter without Russian gas if it’s willing to make some hard choices.

As I said, Putin may well take Kyiv. But even if he does, he will have made himself weaker, not stronger. Russia now stands revealed as a Potemkin superpower, with far less real strength than meets the eye.

This article originally appeared in The New York Times.