Once-troubled department store Myer will pay shareholders a dividend for the first time in five years despite the company’s profits falling by a quarter through the first half of the financial year.

At its half-yearly results released on Thursday morning, the retailer announced it would serve up a 1.5 cents per share interim dividend, payable to investors on May 12, marking the first time the business has paid a dividend since 2017. 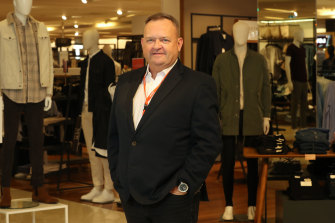 Myer CEO John King said the decision to reinstate the company’s dividend was a sign of confidence in the business.

Chief executive John King said the company’s choice to bring back its dividend was a sign of “confidence in the momentum being built” by Myer, which has struggled throughout the pandemic thanks to lockdowns and plunging earnings.

For the six months to the end of January, Myer’s underlying profits fell 25 per cent to $32.3 million, however the business attributed the fall to the removal of the government’s JobKeeper subsidy, of which Myer claimed $51 million in the first half of the 2021 financial year. Excluding the net benefit of this subsidy, profits rose 55.2 per cent.

Sales also increased notably at the retailer through the half, growing 8.5 per cent to $1.5 billion. Online sales, a major focus for Myer, also maintained their trajectory, up 47.5 per cent to $424 million.

“The half-year results we have announced today demonstrate the strength and resilience of the business providing continued momentum for future growth,” Mr King said.

“The combination of our online platform and store network performed well in navigating the challenges faced during the period including disruptions caused by government-mandated lockdowns to mid-October, the emergence of Omicron in late December, and the mitigation of major supply chain disruption and staffing availability in early 2022.”

For the start of the second half of the financial year, Myer has continued to see sales boom, with trade up 15.3 per cent across the business thanks to strong growth in both the physical and online channels.

The improved trading performance from Myer may pour cold water on plans by majority shareholder and long-time agitator Solomon Lew, who has been threatening to call an extraordinary general meeting at the business to depose its board.