The chief executive of outdoors and surfwear retailer Kathmandu has warned it may have to start raising its prices in certain markets as inflationary pressures and a shortage of key materials for products such as wetsuits batter the business.

On Wednesday Kathmandu, which recently renamed itself KMD Brands to reflect its 2019 acquisition of Rip Curl, told investors it had made a loss of $NZ5.5 million ($5.13 million) for the six months through to the end of January, a decline of 124 per cent on the prior corresponding half. 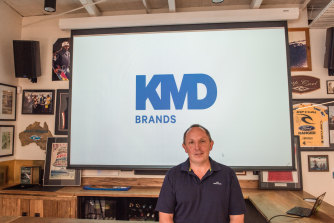 Kathmandu chief executive Michael Daly said the business is hopeful trading over the current half will be better.

Chief executive Michael Daly told The Age and The Sydney Morning Herald the loss was “understandable” given the impact lockdowns and other COVID-related pressures had on the business during the period.

Mr Daly said two of the company’s three brands – footwear business Oboz and Rip Curl – had been acutely affected by supply chain issues and the rising cost of goods in recent months, with a low availability of synthetic neoprene rubber leading to a shortage in Rip Curl’s popular wetsuit ranges.

“On the back of wars, rising fuel prices, we are starting to feel the impact of those inflationary pressures across the board at the moment,” he said.

“It’s hard to go a day at the moment without getting a letter from some supplier saying ‘by the way, your prices are going up’.”

Kathmandu will be able to absorb some of the price rises, especially in its Australian and New Zealand markets where favourable exchange rates soften the blow. However, international markets will not be as lucky.

“In the US market where we buy products, and we buy raw materials in US dollars there’s nowhere to hide. So in that market, we’re having to be more pragmatic about price rises.”

Revenue at the business fell slightly, down 0.8 per cent to $407 million. Kathmandu declared a 3 cent dividend, a 50 per cent rise on last year’s interim dividend. Shares rose slightly to $1.24 following the result.

Rip Curl, which has been Kathmandu’s key earner in recent years, had a sales uptick of 2.7 per cent for the half but also saw its earnings slide 30 per cent to $33 million. Oboz also had earnings fall by 30 per cent as it was heavily affected by a three-month closure of its key factories in Vietnam.

“It’s hard to go a day at the moment without getting a letter from some supplier saying ‘by the way, your prices are going up’.”

However, it was the company’s namesake brand that performed the worst over the half, with sales at Kathmandu declining 0.8 per cent to $128 million, and earnings diving nearly 300 per cent to a loss of $26.3 million.

Kathmandu did not provide any quantitative outlook for the second half of the year, however, Mr Daly said he was hopeful for a winter period unaffected by lockdowns.

“Kathmandu hasn’t been able to trade its peak winter season freely since 2019,” he said. “So we’re excited to be able to trade a full year with all of our stores for the Kathmandu brand.”

“And from a Rip Curl point of view, we’ve had good momentum for some time, so we’re just hopeful of overcoming those wetsuit issues and with no lockdowns, we’ll get to see the full benefits of that brand as well.”

Last week, Kathmandu cut off its Russian distributor due to the country’s invasion of Ukraine, and on Wednesday Mr Daly said the business had no intention of starting to ship products again any time soon.