A conspicuous name is missing from the sharp rebound in megacap tech stocks: Netflix.

Entering the final week of the first quarter, the streaming giant’s stock is headed for its biggest quarterly drop since 2012, down about 38 per cent. That makes Netflix one of the biggest losers in the Nasdaq 100 Index at a time when Apple, Amazon.com and Alphabet are on the verge of erasing their 2022 losses after staging a comeback the past two weeks. 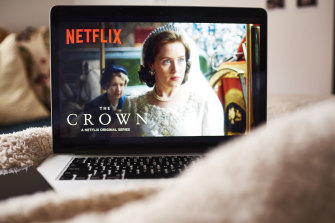 Netflix has missed out on the tech stock revival.Credit:Bloomberg

As with another fallen high-flyer, Facebook owner Meta, much of Netflix’s underperformance can be blamed on a disappointing growth outlook, which sent the stock tumbling almost 30 per cent in the four days after its quarterly results in January. Even after the drop, Netflix shares are still more expensive than peers.

Netflix shares rose 1.3 per cent on Monday, compared with a 1.6 per cent gain in the Nasdaq 100 Index.

“There’s more focus on fundamentals now, which means that Netflix isn’t seeing the lift that the rest of big tech is,” said David Klink, senior equity analyst at Huntington Private Bank. “Investors want more clarity about its strategy, and it may be challenging for it to regain its growth footing over the next couple of quarters.”

A widespread rotation out of frothy assets late last year also sent investors fleeing from what was once seen as a pandemic-era darling and one of the best-performing stocks of the past two decades. It has gained more than 34,000 per cent since the company’s 2002 initial public offering, equal to 34 per cent a year. That far outpaces Microsoft over the same period but lags behind Apple.

Netflix suffered a setback Sunday in its effort to bolster its cachet with viewers: Apple became the first streaming service to win the Oscar for best picture with CODA. Netflix’s The Power of the Dog had been seen as a strong contender.

The stock rout has made Netflix cheap by its own history but not versus other big tech stocks. It now sells for more than 30 times estimated earnings, compared with a multiple of 25 for the Nasdaq 100, Apple’s 27 figure and Alphabet, which sits at almost 22. Meta is the cheapest of the bunch at less than 16 times profit.

Still, the drop has been enough to make a long-time bear take notice.

Wedbush analyst Michael Pachter this month upgraded the stock to a hold-equivalent rating from a sell — a move he likened to hell freezing over in a March 9 report he published. He’d had his “underperform” recommendation since 2011.

“While we do not anticipate significant share price appreciation in the near-term, Netflix’s first-mover advantage and large subscriber base provides the company with a nearly insurmountable competitive advantage over its streaming peers,” Pachter wrote.