Whether it was good luck, a penchant for self-promotion or the perfect timing of a probe into digital platforms, Rod Sims rode a wave of global discontent towards Big Tech during his five year stint leading Australia’s competition regulator.

There was the digital platforms’ inquiry, which raised concerns about an imbalance of bargaining power among Facebook, Google and news publishers for whom, the regulator argued, the platforms were unavoidable. That led to the landmark media bargaining code and unprecedented news-content licensing agreements. 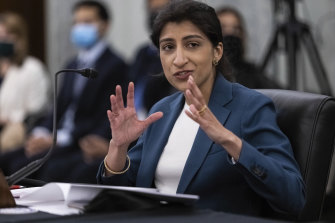 While Sims’ willingness to use competition and consumer law to go after Big Tech attracted headlines around the world, he may end up being best remembered for something else: Getting antitrust agencies around the globe to work together.

“Just as digital platforms are transnational … I think competition agencies need to work in a transnational way as well,” Sims said. “I think that’s really important. Each country just looking inwards at itself is not going to deal with these issues.“

“Competition agencies will be much more powerful if we work together, and if we do some merger investigations and some merger analysis in a similar time-frame, so that we really are completely joined up,” he said.

The United States Federal Trade Commission (FTC) chair Lina Khan appears to be on the same page. She told a recent online conference, attended by Sims, that the global presence of many technology companies meant that “enhancing international co-ordination and co-operation, and working together very closely, is paramount”.

There’s a reason why these comments appear to go beyond the let’s-work-together platitudes you’d expect from top antitrust officials. Both Sims and Khan know that, with parallel investigations and lawsuits now underway on both sides of the Pacific Ocean, the closer relationship between the FTC, which is one of two government agencies enforcing competition in the US, and the Australian Competition and Consumer Commission (ACCC) is already paying dividends.

Australian officials have confirmed in court hearings that they’re keeping tabs on documents lodged in US lawsuits and are feeding that information into their own enforcement action against the tech giants. Meanwhile, the Americans are increasingly looking to Australia to shed light on their own cases.

The cross-pollination has left US-based tech giants facing the unpleasant prospect of having to fight similar legal battles in multiple jurisdictions, with local enforcers’ firepower bolstered by the pooling of investigative resources with foreign counterparts. And that’s music to the ears of Sims.

“I mean, we’re not going to align our arrangements so that there’ll be identical legislation,” Sims said. “But we want to make sure we’re not contradicting each other, that we can each move on similar issues in similar ways, even if our legislative frameworks are a bit different.”

Observers know that the transnational regulatory pincer movement facing Big Tech has as much to do with Australian judges as it does with improved information flows between the ACCC and the FTC.

Both Meta Platforms, as Facebook’s parent company is now called, and Google have fought tooth and nail to have legal action in Australia moved to a US court in California. But Australian federal judges have consistently rejected those requests, arguing that violations of local competition and consumer laws must be dealt with locally — no matter what contractual arrangements the tech companies may have in place.

While not being drawn on recent court decisions, Khan responded to our questions about Australian judges’ forceful claim to legal sovereignty by saying that it was “important for enforcers around the world to be able to assert their law enforcement over their jurisdictions”.

And now, the ACCC’s intention to capitalise on information sharing with its US counterparts appears to be firming up and will be unlikely to change under the leadership of Gina Cass-Gottlieb, who last month Sims in the top job.

The impact of these developments became apparent in December 2020, when the Australian enforcer filed a Federal Court consumer lawsuit against Facebook, as Meta was called at the time, alleging the social-media giant had misled users by promising its Onavo Protect app would keep their online activity private.

This lawsuit was lodged just months after the FTC and the Department of Justice signed an intelligence-sharing deal with their counterparts in Australia, Canada, New Zealand and the United Kingdom — an agreement designed to cover precisely this type of information exchange.

What soon became apparent was that the ACCC was incorporating material gleaned from two New York-based lawsuits against Facebook, led by the FTC and a coalition of 48 state attorneys general. Those lawsuits were also filed in December 2020.

“What’s interesting about the FTC’s action is that they cite the Onavo Protect product as giving Facebook crucial information to enable Facebook to work out which companies they may like to acquire, such as WhatsApp and Instagram,” Sims said at the time. The ACCC told the Federal Court that Meta used personal-activity data from the Onavo Protect app to identify competitors, overlaps between apps and shifts in consumer attention.

But while acknowledging that the two proceedings were linked, Sims pointed out that while the FTC had pursued Meta on competition grounds, the ACCC had focused on alleged consumer law violations. Sims also said that while the lawsuits were announced within the same month, the ACCC had been investigating its consumer-related concerns for a year before bringing its legal action against Meta.

There are also early signs that Big Tech may attempt to undermine the relationship between the FTC and ACCC — in the Dialogue case, Meta lawyers in the US warned that the Australian courts’ interest in the case posed an “unacceptable risk” to an earlier privacy settlement between Facebook and the FTC.

So far, the cooperation appears to be working and may become an initial step toward even tighter transnational enforcement arrangements targeting tech companies. “It’s very much about alignment, and I think the alignment amongst competition agencies at the moment has never been higher,” Sims said. “And we’re very pleased with that and pleased to be part of that.”