Dov Hikind: ‘Beyond comprehension’ Biden met with a Farrakhan follower

The keynote speaker for a ticketed “invite-only” event at the national convention hosted by Al Sharpton’s organization has repeatedly praised antisemite Louis Farrakhan and told a congregation it is their “responsibility” to make gay people “uncomfortable in [their] sin.”

Bryant, who has met with Sharpton multiple times and attended other NAN events, told the congregation at the Baltimore Empowerment Temple in 2012 that “homosexuality is not the only sin, but it is a sin” while adding that it is their “responsibility” to make gay people and other sinners “uncomfortable in [their] sin.” 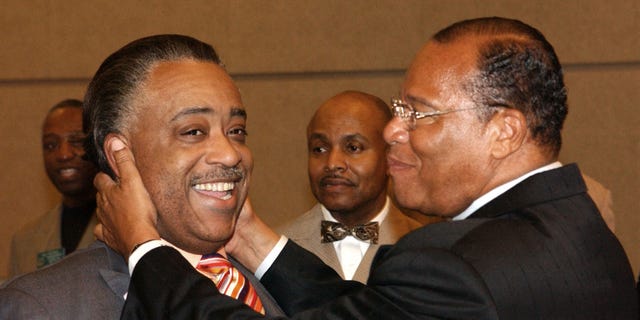 He went on to attack former President Obama for supporting gay marriage, telling the congregation he was “Black and wrong” and “Black and out of order.”

Bryant also has a long history of praising Farrakhan, who has espoused antisemitic rhetoric dating back decades, including calling Jews “wicked” and comparing them to termites by saying he was “anti-termite.” In 2015, Bryant interviewed the Nation of Islam leader and said he is “one of the greatest leaders of our people.”

“We welcome to the Word Network and the entire world, the honorable Minister Louis Farrakhan! We’re honored to have you sir,” Bryant said. “I’m so appreciative to be able to mark in history that I lived in the same chasm of time as one of the greatest leaders of our people.”

Additionally, in 2015, Bryant tweeted out a teaser of the interview on the day it aired and tweeted pictures of himself with Farrakhan from a meeting with him about the 20th anniversary of the Million Man March.

Bryant also called for “the Black church to have a real conversation about homosexuality” in a 2012 tweet, writing “what’s in society is in our sanctuary,” and in 2016 shared an article about “why he doesn’t care” about how a “gay group” wanted him “cut from an MLK event for calling homosexuality a sin.”

In a tweet from 2019, Bryant said that he was “humbled” to be in Farrakhan’s presence. His Twitter page has dozens of other tweets related to Farrakhan also.

Bryant isn’t the only speaker at the NAN conference who has vocally supported Farrakhan or attended an event with him. Sharpton has associated with him for decades and has been in several pictures with him.

Dr. Fredrick D. Haynes III, the senior pastor at Friendship-West Baptist Church and a board member of NAN, tweeted a photo of himself and Farrakhan in 2017, calling him a “wonderful and great man.” In 2015, Haynes also lavished praise on Farrakhan, saying he was “a prophetic leader of our time.”

Wes Bellamy, the former vice-mayor of Charlottesville and national public policy chairman for 100 Black Men of America, is scheduled to be a panelist on Saturday and has tweeted his support for Farrakhan also. In a 2015 tweet, Bellamy said Farrakhan “spoke to my soul today” and said it made him feel like “moving mountains.” In 2012, Bellamy tweeted that it was an “honor” to be in the presence of Farrakhan, calling him a “wise man.”

He also tweeted, “HELL YEA” in response to a tweet asking whether someone would go see Farrakhan speak if they had the opportunity to do so. Bellamy also has a history of homophobic and sexist tweets.

Attorney Ben Crump also tweeted out pictures of him meeting Farrakhan in 2015, saying it was a “pleasure to meet” the Nation of Islam leader.

Additionally, Dr. Michael Eric Dyson, a Vanderbilt University divinity professor who called Farrakhan “one of the greatest thinkers” in American culture, spoke at the conference on Thursday.

Dyson said in 2020 he disagrees with Farrakhan’s stance on the LGBT and Jewish communities, but said he had an hours-long conversation with the Nation of Islam leader at Farrakhan’s home.

“And for three hours, we broke bread and talked about a great range of subjects, some of which we agree on and some of which we didn’t agree on,” the professor continued. “And he said, ‘My brother, can one be corrected by one’s brother if there is no conversation. Amen.'”