The chief executive of Dan Murphy’s owner Endeavour Groups says the company is yet to see any material price hikes come through on its products, but this could change in the latter half of 2022.

Steve Donohue, who oversees the operation of a number of pubs across the country alongside the BWS and Dan Murphy’s bottle shop chains, told investors on Wednesday morning that while the company was conscious of the increasing cost of living, it hadn’t seen a “material shift” in prices yet. 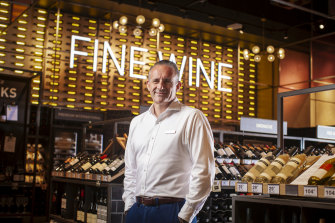 Endeavour Group CEO Steve Donohue warns price rises could come through in the latter part of the year.Credit:Eamon Gallagher

“We haven’t seen considerable [price] increases flowing through that are out of step with what we’ve seen historically,” Donohue said. But he also noted it was standard within the drinks industry to pass any price increases that do come through to consumers.

The company is bracing for potential price hikes in the next six months, with its pubs having already started to charge $1 to $2 more for its steaks due to higher red meat prices.

The next round of [price] changes from suppliers “will be perhaps the more telling moment,” Dononue said.

Donohue’s warnings echo those made by retailers and analysts earlier in the week, as persistent supply chain issues in China and disruptions caused by the Russia-Ukraine war prompted warnings that suppliers will be forced to consistently raise prices for at least the remainder of the calendar year.

Endeavour also told investors it will have to book $9 million in additional costs through the third quarter of the financial year due to the impact of devastating floods in NSW and Queensland, which it said had caused “extensive damage” to its stores in the affected areas.

The total impact of clean-up costs, stock write-offs and lost profits when the stores were unable to open will reduce Endeavour’s earnings before interest and tax by $9 million for the quarter. The company is currently working through an insurance claim to see how much will be covered.

Overall, total sales for the first three months of the year declined 2.1 per cent to $2.72 billion, however, this improved slightly to a fall of just 0.3 per cent when adjusted for Easter, which was later this quarter compared to last year.

The sales drop came entirely from the company’s bottle shops, with its hotels and pubs reporting a 3.8 per cent uptick in sales. Donohue said COVID had continued to hurt business through the start of the quarter, but it had picked up again by the end of January.

“There’s a lot more consistency to our sales pattern at the moment… and we saw that through Easter as well,” he said.

Endeavour’s shares fell 2.3 per cent to $7.69 on Wednesday, though Barrenjoey analyst Tom Kierath said the trading update was better than expected.