The message from Coles boss Steven Cain can be distilled as such: food inflation is just getting started and supply chain constraints have a way to play out.

But there is a more subtle message to Coles shareholders – that the politics of profiteering at a time when a section of the population is struggling from higher food costs is not a good look.

Cain slaughtered the point that Coles would be working hard to keep food costs down below the general rate of food inflation, which was 5.3 per cent in the March quarter. 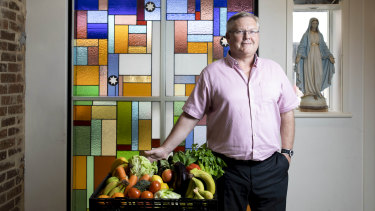 Coles reported supermarket inflation (which means price rises) of 3.3 per cent for the quarter but that doesn’t present an accurate picture. In the previous quarter to December 31, Coles reported deflation in prices. It appears that the inflation genie didn’t arrive much before February and really didn’t really begin flexing until as late as March.

Thus, Coles’ rate of inflation at the end of March (the exit rate) was clearly more than 5 per cent and this is just the beginning.

There are a whole series of reasons why Coles and its suppliers have experienced higher costs – transportation, energy, raw materials and packaging among them.

If Coles were to absorb its higher costs and that of its suppliers, it would play havoc with its margins and profits. If Coles is to pass them onto customers, it could tarnish the image of being a value supermarket destination (thus losing some customers) and reflect poorly on its social licence credentials. But it must improve returns to shareholders.

In the run-up to the federal election Prime Minister Scott Morrison will be desperately hoping Cain and his counterpart at Woolworths, Brad Banducci, at least try to keep a lid on food inflation and share some pain with shareholders.

It’s a fine balancing act for supermarket chief executives and Cain is still in the early stages of negotiating with its suppliers on price rises.

The reality is that Coles services a divergent population. Cain readily admits that in one large bucket sits consumers that won’t feel the pain of higher food prices. This group can withstand price rises at the checkout – their demand economists would call inelastic.

There are about 200 stores within the Coles fleet that service the more affluent customers.

At the other end, there are a similar number of stores in more disadvantaged areas. The bulk lies in the middle and this group is generally more cashed up than it was before COVID.

The customers who are highly sensitive to price increases in food will change their buying behaviour. This group is already buying less meat because of two years of sustained price rises and has probably picked up more bananas and avocados than usual – given these two items have significantly come down in price.

Those customers are also more prone to moving to discount supermarkets – by that read Aldi – to shave some cost from the weekly shop. Cain says that while there was less discounting in the quarter, retaining some periodical discounting – like the weekly specials – would appeal to the more value-conscious customers.

But this exercise has been complicated by availability problems that have plagued the wider industry.

‘Forecasting sales for supermarkets is like “throwing a dart at a cockroach on the wall”.’

Supply chain gridlock was a feature of Coles’ March quarter. The post-COVID demand has collided with the war in Europe, a lockdown in China and a number of massive weather events across Australia that have savaged logistics networks.

A shortage of workers thanks to almost no immigration have only added to the woes of moving product and getting into stores.

Cain, who distinctly avoids crystal ball gazing, doesn’t want to predict when the supply chain will return to normal but he doesn’t see the problems disappearing before the end of the calendar year.

But he is hoping that the quarter to March, which he described as “the most disrupted (quarter) we have encountered so far”, will be the worst of it.

Not only did Coles incur COVID costs of $65 million during the quarter compared with $10 million in the previous March quarter, it also sustained a $30 million cost hit from the floods.

The supermarket division’s sales performance for the quarter was a respectable 3.9 per cent rise on a like for like basis. But it is difficult to know what the market was expecting in these unusual times.

As one analyst quipped, forecasting sales for supermarkets is like “throwing a dart at a cockroach on the wall”.