Russia’s invasion of Ukraine and the sanctions that it has attracted from the West are disrupting global commodities trading and trade flows. They are also creating opportunities.

While the most high-profile of the commodities impacted by the war and the sanctions are oil and gas, with the prices of both soaring as Europe scrambles to find alternate sources of supply to reduce its reliance on Russian energy, the other big commodity affected is fertilisers. 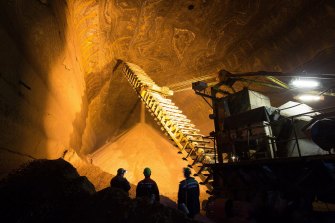 The price of potash has rocketed from about $US220 a tonne before the invasion to more than $US560 a tonne.Credit:Bloomberg

Agricultural productivity and food security —and fertiliser prices – are already being affected by the war and the sanctions. The price of potash, for instance, has rocketed from about $US220 a tonne before the invasion to more than $US560 a tonne.

The sanctions haven’t just been imposed on Russia. The European Union began imposing sanctions on Belarusian individuals and entities after the discredited 2020 presidential election amid claims of human rights abuses by the authoritarian president, Alexander Lukashenko. Since the invasion, with Belarus used as a staging post for Russian troops, the EU has extended the sanctions to trade, including fertilisers.

It is almost inevitable that the West’s sanctions on Russia and Belarus will remain in place for at least the medium term and perhaps long term, generating windfall gains for oil and gas companies and fertiliser producers in countries not subject to them.

For BHP, that adds a compelling strand to what it already regarded as a compelling case for its giant Jansen potash project in Canada.

Speaking at a Bank of America-organised conference in Miami overnight, BHP’s chief executive Mike Henry announced that first production from the $US5.7 billion ($8.1 billion) first stage of the project would be accelerated by a year, from 2027 to 2026, and that a study of the feasibility and economics of stage two of Jansen had already begun. Stage 1 of Jansen was only given a go-ahead last August after more than a decade of intense evaluations.

Henry told the conference that he wished the project had been approved a decade ago. If it had, it would be generating an extra $US2 billion to $US3 billion of earnings before interest, tax, depreciation and amortisation (EBITDA) a year, he said.

While he said the “tragic events” in Ukraine had highlighted the higher than usual potential for supply disruption in the potash market, he described it as “positive reinforcement” for a decision already taken.

Jansen’s appeal, even without the events in eastern Europe, is that its fundamentals are good – it’s a large low-cost project in a basin with a century of potential production – in a market whose fundamentals are strong. 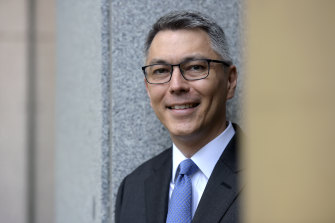 BHP chief Mike Henry is bullish on the company’s Jansen project in Canada.Credit:Bloomberg

Before the war in Ukraine, BHP was forecasting that new supply would be needed by the end of this decade and that the prices would probably be set by the operating and capital costs of Canada’s greenfield solution miners (they pump water or brine into potash deposits to bring them to the surface), which are higher than for a conventional potash mine like Jansen.

Break-even costs for solution mines are around $US300 a tonne, which implies a structural increase in the floor for potash prices relative to prices over the past decade even without the supply-side impacts of continuing sanctions on Russia and Belarus.

Jansen’s first stage is expected to produce between 4.3 million and 4.5 million tonnes of potash a year once it ramps up. Stage 2, if it proceeds, would add another 4 million tonnes a year at a lower capital intensity than stage 1 – at $US800 to $US900 a tonne it would be about 30 per cent lower – because of the existing infrastructure.

BHP estimates it would generate internal rates of return between 18 and 20 per cent and a payback period of only four years at long-term consensus prices that are way below current spot prices.

There are, in fact, potentially four stages to the Jansen project and eventual production of 16 or 17 million tonnes of potash a year, or about 25 per cent of the current market, with each stage having lower operating and capital costs and higher incremental returns. If all four stages were in place and prices were half of their current level Henry said Jansen would generate $US4 billion to $US5 billion of annual EBITDA.

That number is significant and central to BHP’s decision to divest/demerge its petroleum business via the merger of BHP Petroleum with Woodside. BHP shareholders will emerge with a little less than half of the enlarged business.

If BHP seizes the moment to accelerate Jansen it will not only (hopefully) benefit its shareholders but it will reduce the world’s dependence on two pariah country suppliers and reduce their global economic influence and leverage in the process, which would be a good thing.

Jansen provides a long-term replacement for the hole in its earnings base that the loss of the $US3 billion a year of oil and gas EBITDA will create, while substantially lowering BHP’s carbon footprint and its capital intensity in the process.

The other appeal of potash is that its market and pricing is uncorrelated to BHP’s other commodities and a Canadian asset of the scale of Jansen also adds geographical diversity.

Petroleum once placed a diversifying role in the BHP portfolio, with the unusual (for a major miner) combination of resources putting a floor under BHP’s cash flows and lowering its risk profile.

Since the 2008 financial crisis, however, conventional commodities – iron ore, copper, coal and energy – have been increasingly correlated as their markets have become “financialised” and turned into an investment class alongside the physical demand, with derivative markets and exchange-traded products.

A large-scale potash presence within BHP’s portfolio will help it generate more stable cashflows, which is important for a group that has to invest very large sums with long timelines before any return in a volatile sector. BHP has, for instance, been investing in what became Jansen for nearly a decade and a half but cash won’t start flowing until 2026.

The invasion of Ukraine and the West’s response might be an ill-wind – it’s almost the definitive ill wind – but if BHP seizes the moment to accelerate Jansen it will not only (hopefully) benefit its shareholders but it will reduce the world’s dependence on two pariah country suppliers and reduce their global economic influence and leverage in the process, which would be a good thing.