Woodside shareholders have overwhelmingly approved its acquisition of BHP’s oil and gas business, but almost half of votes rejected the energy giant’s plans to address climate change, in what may be the strongest ever vote against a company’s climate policy.

The climate plan was voted down by 49 per cent of shareholdings, exceeding the 37 per cent no vote Santos received earlier in May. The result supports BHP chief executive Mike Henry’s decision to offload the miner’s petroleum division so BHP could focus on what he calls future-facing commodities. 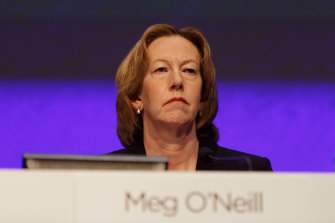 Woodside chief executive Meg O’Neill told the annual general meeting in Perth on Thursday that the merger that will make Woodside a top 10 ASX-listed company would take effect from June 1.

The purchase of BHP’s assets with scrip that will result in the miner’s shareholders owning 48 per cent of the enlarged Woodside was backed by almost 99 per cent of votes and received little discussion at a meeting dominated by climate issues.

Woodside chairman Richard Goyder said the board stood by the poorly received climate report and the company’s overall climate strategy.

Woodside plans to cut its emissions by 30 per cent this decade and reach net-zero emissions by 2050, but has given no interim targets for the final two decades. The feasibility of the two ways to reach net-zero without reducing carbon dioxide production – carbon storage and offsets from vegetation – received multiple questions at a meeting where short to medium-term financial performance was barely mentioned.

Goyder would not commit to when a revised climate report would next be put to a shareholder vote despite the present plan not covering BHP’s assets that will soon be about half of the company.

An additional threat to Woodside’s social licence became more prominent at the meeting when traditional custodians of the area that houses Woodside’s two biggest assets – the North West Shelf and Pluto LNG plants – claimed it did not have their consent to develop its $US12 billion ($17.2 billion) Scarborough gas project.

Woodside’s two LNG plants sit on the Burrup Peninsula in north west WA, known as Murujuga to traditional owners, which is nominated for World Heritage listing due to more than a million ancient rock engravings up to 50,000 years old.

Josie Alec, a Murujuga traditional custodian, asked if Woodside would follow Rio Tinto’s example after it blew up sacred caves at Juukan Gorge and apologise for the destruction of 4000 to 5000 pieces of rock art when it built its original LNG plant for the North West Shelf project.

Goyder said he was not aware of the destruction before chief executive Meg O’Neill stepped in and said: “Our actions … were best in kind in the 1970s, it’s not what we would do today, and we regret the damage that was caused.

“Subsequently, we attempted to work very closely with the traditional custodians to relocate some of the rock art that we had moved… to places that would be more culturally appropriate.”

The principal concern about the rock art is whether emissions from industry, including Woodside, are affecting the very thin layer of patina on the outside of rocks that the engravings are etched into. If the patina disappears so does the art. 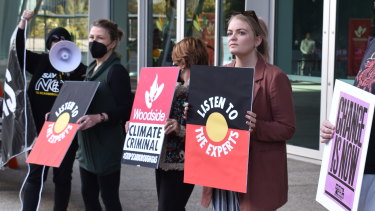 Woodside chair Richard Goyder: “I don’t think the views of protesters outside the meeting today and ours are that different.” Credit:Peter Milne

Another traditional custodian, Raelene Cooper, disputed whether Woodside had the free, prior and informed consent of all traditional owners for its Scarborough project that involves doubling the capacity of the Pluto LNG plant.

Woodside has negotiated with the Murujuga Aboriginal Corporation (MAC) that Cooper has been a board member of, but differences in the local indigenous community have emerged, including whether accepting funds from Woodside comprises MAC.

“Murujuga Aboriginal Corporation does not speak on behalf of all individuals, especially those that have cultural authority,” Cooper said.