A shortage of coal at Australia’s largest power station, Origin Energy’s Eraring plant in New South Wales, has forced the company to slash the profit target for its electricity business and threatens to deepen a worsening energy crisis engulfing the east coast.

Origin, one of the country’s top electricity suppliers, on Wednesday warned that challenges sourcing black coal for the 2880-megawatt generator on the shores of Lake Macquarie had “deteriorated significantly” over recent weeks because of production issues at supplier Centennial Coal’s nearby Mandalong mine that are not expected to ease until next year. Its shares plunged after the news. 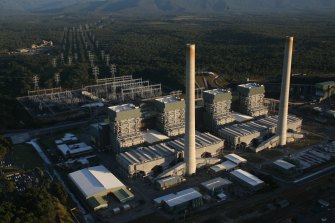 The Eraring coal-fired power plant in the federal seat of Hunter, NSW.Credit:Dean Sewell

The insufficient delivery of the coal that is usually transported via conveyor belt to the power station means Origin must source much more expensive alternative supplies of the fossil fuel by rail. Coal prices have been rising sharply as an energy crunch is being exacerbated by utilities shunning Russian supplies and scrambling for alternatives in a bid to starve Moscow of the revenue it needs to fund the war in Ukraine.

“There is currently extreme volatility across commodity markets, driven by a combination of global energy supply and security concerns, exacerbated by the impact of the Russian invasion of Ukraine, with subsequent unprecedented increases in international energy prices including coal, gas and oil,” Origin Energy said.

“Domestically, coal plant outages and high coal and gas prices have contributed to a steep escalation in wholesale electricity prices.”

Origin’s share price plunged more than 10 per cent on Wednesday as it warned investors the situation had forced it to reduce the underlying full-year earnings forecast for its electricity business from its original range of between $600 million to $850 million to as low as $310 million to $460 million.

The company has scrapped the division’s profit forecasts for the 2023 financial year entirely.

“Origin will continue to assess the outlook, with a view to providing an update at full-year results in August,” it said.

Origin Energy chief executive Frank Calabria is due to brief investors on a conference call on Wednesday.

The news comes as power bills threaten to add to rising cost-of-living pressures across Australia as inflation sits at a two-decade high. The Australian Energy Regulator has confirmed that spikes in the cost of wholesale electricity because of higher fossil fuel prices are set to drive double-digit jumps in household and small business bills across the country within weeks.

So-called “default market offers” – price caps on what retailers can charge households and businesses that don’t take up special deals or bundle utilities bills – would rise in all states across the east-coast electricity grid, the regulator said.

In Victoria, where the state’s Essential Services Commission determines its own default offer, the price cap for households will rise by 5 per cent, or $61, a year.

While the global energy crunch is pressuring Origin’s electricity business, the impact will be partially offset by rising prices boosting its natural gas business including its Australia Pacific LNG (liquefied natural gas) joint venture in Queensland, enabling the company to maintain its group-wide earnings forecasts.