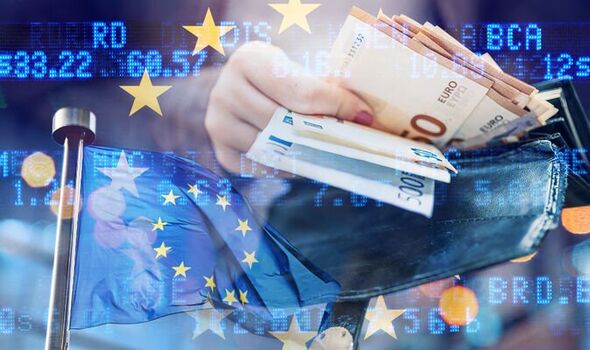 While the years since the debt crisis have seen the 19 countries in Europe’s euro area centralise and toughen bank control, the fragility of the Union was this week laid bare. It comes after the European Central Bank (ECB) announced measures to temper a bond market rout, but investors looking for more decisive action were left disappointed.

After a rare emergency meeting on Wednesday, the ECB promised fresh measures to temper the market selloff but the lack of a concrete plan to help debt-laden countries like Italy and Greece left some disappointed.

The ECB’s efforts to restore confidence in weaker states facing surging borrowing costs as its debt-buying programme ends was met with concerns of a eurozone debt and banking crisis, which struck the bloc a decade ago.

Spurred by fears higher borrowing costs will choke economic growth, the markets rout also exposed cracks in the uneasy alliance, which is held together largely by the central bank rather than a government with power to tax and spend.

This was in sharp contrast to 2012, when then ECB president Mario Draghi tackled a crisis of confidence in the currency’s future with a pledge to do “whatever it takes”, followed by a vast programme of money printing.

But this time the Italian Prime Minister said he would not be able to come to Europe’s rescue, saying: “I am not a shield against any event. I am human to whom things happen”.

Following the announcement, an index of eurozone shares gained 1.6 percent, bouncing off lows hit. While eurozone banks climbed 2.5 percent, but were off highs hit earlier in the session.

Italian bank stocks, which have been hit hard recently on fears about Rome’s surging debt costs, trimmed some gains, but were still trading 4.3 percent higher as bond yields fell.

Andrew Mulliner, head of global aggregate strategies at Janus Henderson said: “The markets’ reaction will be a relief to them (ECB policymakers), but they need to deliver on the anti-fragmentation tool relatively quickly if they want to maintain a hawkish rate outlook

“The reality is that an anti-fragmentation tool is much less well suited to tighter policy as it is to looser policy and the only other period the ECB has had to close spreads has been in an environment of wanting to maintain or loosen policy.”

He said: “It was easy to do whatever it takes when inflation was low.

“The emergency meeting created a lot of expectations that the ECB cannot ultimately meet.

“Only governments can address the real economic divergence and incomplete set up of the eurozone.”

French Finance Minister Bruno Le Maire cautioned against a fragmentation of the bloc, the type of public warning once common but that largely disappeared since vast money printing eased the debt crisis.

The divisions in the eurozone are likely to come to the fore at a ministers’ meeting later today to discuss a deadlocked plan to reinforce the bloc’s financial system.

A central pillar of financial crisis reform, the so-called banking union remains mired in debate, with the critical question of region-wide protection of deposits still unresolved.

Karel Lannoo of the Centre for European Policy Studies, said: “We have gone backwards rather than forwards.“If there is a bank failure, it will be the same as 2008,” warning individual states rather than the wider bloc would be left to shoulder the burden.

He added: “The Draghi period is over.”

How Europe responds will now be closely watched by bankers and investors.

Vis Raghavan, CEO of EMEA and Co-Head of Global Investment Banking at JPMorgan, said: “So much of what we do is a confidence game.

“A lot of what we are seeing is about confidence in policy and achieving an orderly route out of stagflation.”

But with the ECB running out of road to keep investors happy, the ball is back in the court of politicians to act.

Carsten Brzeski, an economist with Dutch bank ING, added: “While the ECB could keep markets happy with a bazooka, it’s getting harder to do this in a time when it has to fight inflation.

“That leaves it up to the governments to finally get their act together in finding a proper union.”