New York (CNN Business)There’s not a lot that Joe Biden, Congress or the Federal Reserve can do to bring down the record high gas prices. High gas prices themselves might do the job for them.

That’s because big swings in prices of a good or service are typically caused by an imbalance between supply and demand. And when the imbalances cause prices to soar, as has happened to gas and oil prices since Russia invaded Ukraine in February, those high prices can help rebalance supply and demand. How? By causing more supply and/or less demand.
Increasing energy supply, especially enough to rebalance markets, will be difficult. It would take many months, maybe years, to significantly increase US refinery capacity to match where it was before the pandemic. And oil companies seem committed to not flooding the market with oil, which could drive down prices. Instead, oil companies are using their windfall profits to increase share repurchases or dividends and help boost their stock prices.

So how about reducing demand? There are already signs that’s happening.

The amount of gasoline pumped at the nation’s 130,000 gas stations is down 7% for the week ending June 11 compared to same period last year, and down 17% from the same week in pre-pandemic 2019, according to OPIS data.
Without the high prices, US consumption would likely be higher. There are 6.5 million more people with jobs than a year ago at this time, according to the Labor Department, and with offices reopening and workers once again commuting, there should be more demand for gas.

But people are apparently finding ways to drive less — for example trimming or consolidating trips to run errands, limiting the number of days they go to newly reopened offices or turning to public transit.
There is enough pent-up demand for vacations that it’s not clear many people are willing to forgo long-planned trips to avoid $5 gas. But the end of this summer’s travel season could result in an even bigger drop in demand for gas come fall, and an even bigger drop in prices. US gasoline consumption — and prices — typically decline steadily in the fall and early winter.
“I think consumption is going to start to feel the effects of high prices in the third and fourth quarter,” said Robert McNally, president of consulting firm Rapidan Energy Group. “I think we’ll be more in the $4 a gallon range because of it.”
The biggest risk to demand would be if the high gasoline prices plunge the nation into recession.
Nothing kills demand like a recession, which reduces economic activity overall. When people get laid off, there’s less need to drive to work and fewer people driving to the store or other destinations.
The previous record for high gas prices before the current spike came in July 2008, when the national average hit $4.11 a gallon. But the collapse of the financial markets and soaring job losses — caused the by housing bubble bursting, and not the cost of gas — quickly made those high gas prices a distant memory.
By the end of 2008 the price of gasoline had fallen 60% to $1.62 a gallon. But cheap gas was of little consolation to the nearly 3 million people who lost their jobs over the course of those five months as what started as a normal recession turned into the “Great Recession.”
There are rising concerns on Wall Street and corporate boardrooms that another recession is on its way. And there are alarm bells that consumer reaction to gas prices could be one of the factors that causes a recession this time. 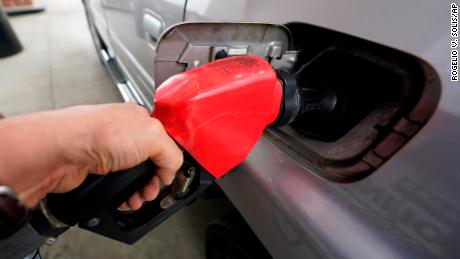 Consumer spending at retailers other than gas stations has started to decline, according to the latest government reading. Even with reduced gasoline consumption, people have to spend more at the stations because of the record prices. And that, in turn, means people have less to spend elsewhere — a troubling sign for the overall economy, because 70% of the US economy is built on consumer spending.
And America is only part of the picture. Oil prices are based on trading in global commodity markets. Thus, global consumption, not just US consumption, is the major driver.
In much of the world, especially developing economies, the price is rising even faster. That’s partly because oil futures are priced in dollars, and the strong dollar means prices are rising even faster in much of the world, said Pavel Molchanov, an oil analyst at Raymond James
“The economies most at risk from $120 a barrel oil are those emerging markets where the local currency is under heavy pressure,” said Mochanov. “Think about how painful $120 a barrel is when someone’s currency might be down double-digits. It exacerbates the pain.”

So if the current oil and gasoline prices bring about recessions in economies around the globe, let alone in the United States, you can expect gas prices to fall.
But you won’t necessarily be happy about it.
Source: Read Full Article