‘Inflation trajectory, domestically as also globally, is what will shape the economy, and therefore the market, over the next couple of quarters.’ 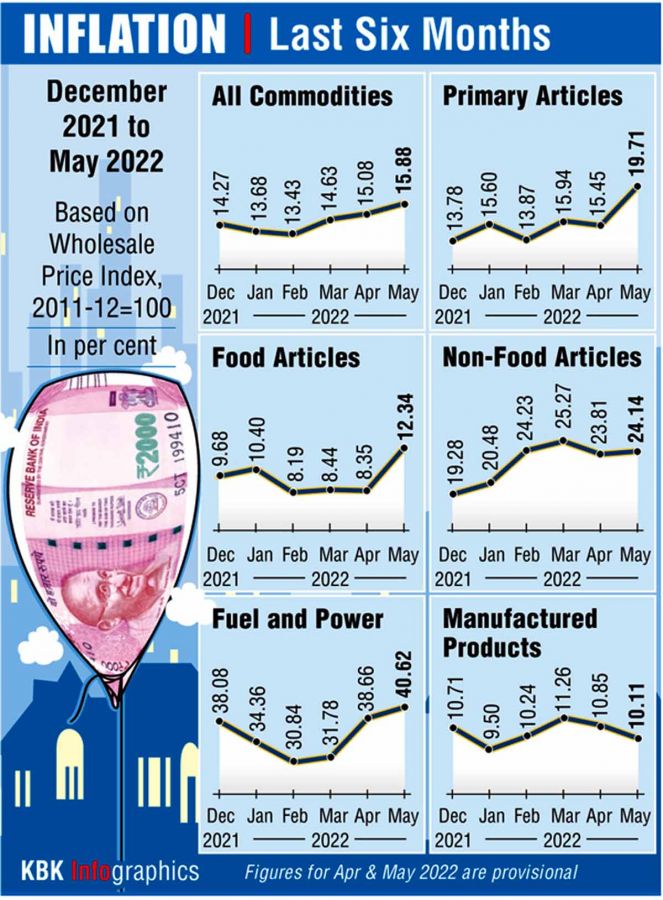 “That WPI is running at almost twice of CPI suggests that either there is a material risk to corporate profitability, or if passed through, then demand,” Aditya Narain, Head of Research at Edelweiss Financial Services, tells Samie Modak/Business Standard.

What are the key headwinds for the market at this juncture?

It’s been a very long time since India experienced such broad-based and high inflation, and the demand impacts are a little unknown.

That WPI is running at almost twice of CPI suggests that either there is a material risk to corporate profitability, or if passed through, then demand.

The policy responses also hurt the market, but that’s an offshoot of inflation, rather than an independent cause.

Inflation trajectory, domestically as also globally, is what will shape the economy, and therefore the market, over the next couple of quarters.

Do you expect FPI outflows to stem going ahead?

The law of averages and mean reversals suggest it should: The current outflow has been more pronounced and consistent, than ever before.

That said, I would believe the lead element would be a global driver, rather than anything domestically, as the underlying economic trajectory is unlikely to swing materially — particularly on the upside.

India does not offer any real support from valuations either, though its economic consistency could well be more pronounced than most other dominant markets. We already spoke on the markets; where the risks tend to the downside on account of inflation and its distortions.

Interestingly, inflation has not really had a material impact in the quarter gone by.

We saw aggregate earnings cuts relatively limited at the 2-4 per cent levels so far.

We do though believe it could be more meaningful in the current quarter; where a fuller impact of demand and some lingering costs might well start flowing through.

We also believe some of the more recent developments on metals prices domestically, could further swing aggregate earnings to the lower side.

So there are downside risks, which are possibly not fully apparent yet.

How do valuations look at the moment? Does the YTD fall in valuations provide any comfort?

Valuations are clearly more reasonable than what they have been for a while, but at 17-18 times one-year forward, it remains a relatively expensive market. And with earnings risk, you can’t say valuations are compelling.

That said, there is some comfort, and valuations are no longer a reason in themselves to be negative.

The Street has turned bearish on IT stocks due to worries around slowdown in growth. What is your stance on IT?

We continue to like the bottom-up demand outlook, which we believe will sustain for a while, and earnings should continue to be largely as anticipated, with supply pressures possibly peaking.

That said, the valuation framework is a function of the global rate outlook, and expectations on the slowing of the US economy.

That could cause some reverberations, and that leaves us a slight underweight at the portfolio level.

The near-term outlook on the IT sector should also be viewed on the sector’s overall performance over the last 2-3 years.

That’s been huge, and to some extent some of the sector’s weakness and levelling off in the recent past, should be seen in a longer term cycle, which remains robust.

Which are the sectors/themes you are most bullish and bearish on?

We are running a low beta, low demand risk bias in our overall market positioning.

That keeps us overweight on auto, energy, banking and insurance and underweight cyclicals, industrials, metals and real estate.

What is your view on the banking pack?

We believe the lack of asset risks, some uptick on lending — which is concentrated with a few players — and the benefits of the early part of the rate cycle should all be supportive.

We like the leading private banks, as also the insurance space, where between valuation support, a bounce-back in growth, and the waning of sectoral stock supply concerns, there are upsides for this space at absolute and relative levels.