It happens like clockwork. Companies, including Apple this month, introduce new options to make their gadgets feel new and improved.

Soon you’ll be able to zap that text message you sent but regretted! A Mac computer will be able to use an iPhone camera for video calls! You can change the colour tint of Android app icons to match the rest of your screen!

And like clockwork, a vast majority of people won’t use these features. 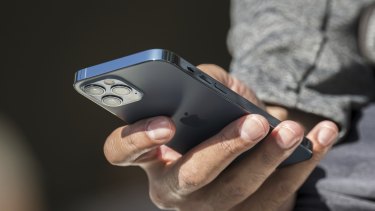 Why do companies keep adding functions that are handy for a tiny number of people and ignored by most of us?Credit:Bloomberg

Tech experts told me that only a small percentage of people adjust anything about how their electronics or software come from the manufacturer. Most of us are not tinkering constantly with settings for the fancy features of phones, TVs and laptops.

Why, then, do companies keep adding functions that are handy for a tiny number of people and ignored by the rest? And is there a better way to design products?

Cliff Kuang, a designer in the tech industry and an author of a book about the history of product design, singled out three culprits behind ever-growing features. First, companies add options because it helps them market their products as new and exciting. Second, products with many millions of users must appeal to people with widely different needs. And — this one stings — we are infatuated with options that seem great but that we can’t or won’t use.

We are infatuated with options that seem great but that we can’t or won’t use.

Kuang described this third factor as the “the inability of users to distinguish between ‘Hey, that looks good’ and ‘Hey, I need that.’”

If it makes you feel better, Kuang said he’s guilty of this, too. He was wowed by a feature in his Tesla to automate parallel parking. “The first time I used it, it was cool,” he said. “And I never used it again.”

Technologists often grumble that they’re in a no-win situation in product design. Devoted fans demand more and more options that often make no sense for normals. (This phenomenon is often derided as “bloatware,” as in bloated software.) It is one reason technology often feels as if it’s made for the 1 per cent of digital die-hards and not the rest of us.

But if companies try to pare back little-used options or change anything people have grown accustomed to, some users will hate it. Everyone has an opinion. Steven Sinofsky, a former Microsoft executive, used to joke that revising widely used software like Windows and Microsoft Office was like ordering pizza for a billion people.

In April, technology writer Clive Thompson made a provocative suggestion to fight the temptation to stuff more features into existing technology: Just say no.

Thompson, who is a contributing writer for The New York Times Magazine, said that companies should decide in advance the set of features they want to work toward, and stop when they get there.

“Feature creep is a real thing and wrecks software every year,” he told me, citing Instagram as a product that he believes grows worse the more options it adds.

Products can’t stay frozen in the past, of course. And some features, like those to automatically notify emergency services after car crashes, could be worthwhile even if they’re infrequently used. It’s also unpredictable which add-ons might turn out to be useful for the masses.

Kuang said the best technology products change little by little to nudge users toward a future the creators have imagined. He said that Airbnb did that by evolving its website and app toward a significant recent change that prompts people to explore different types of homes without having a destination or travel dates in mind.

To get out of the bloatware trap, Kuang said, “you work backward from the future that you’re trying to create.”

This article originally appeared in The New York Times.